Open Knowledge International coordinates the Open Data for Tax Justice project with the Tax Justice Network, working to create a global network of people and organisations using open data to improve advocacy, journalism and public policy around tax justice. Today, in partnership with the Tax Justice Network, we are publishing Paradise lost, a data-driven investigation looking at who should feature on the forthcoming European Union blacklist of non-cooperative tax jurisdictions.

This blogpost has been reposted from the Tax Justice Network site. 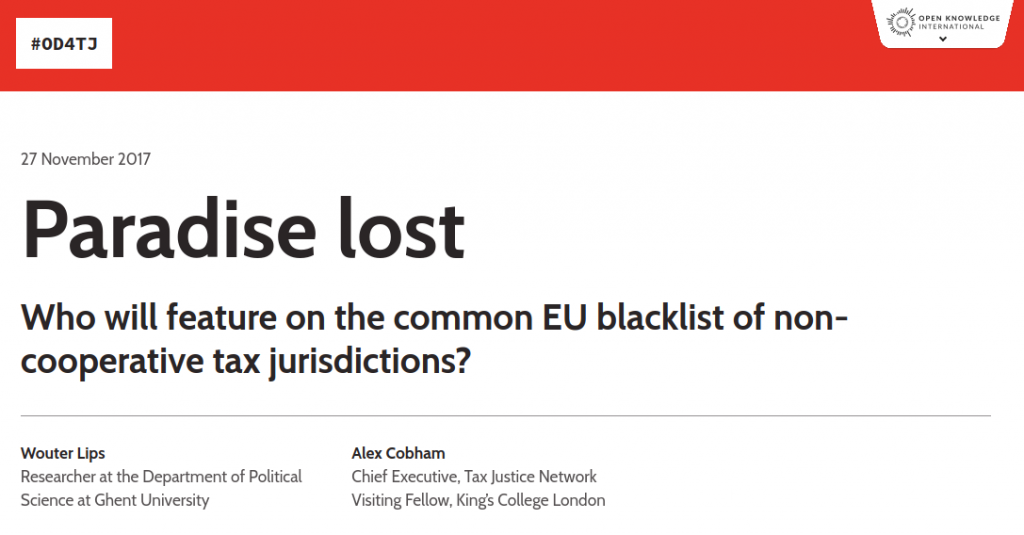 UK financial services could face heavy penalties after Brexit unless the UK turns back on its aggressive tax haven policies, a new study from the Tax Justice Network has found.

The study looks at the new proposals for a EU blacklist of tax havens. The EU has said that it will impose sanctions on countries which find themselves on the list.

The EU is due to publish its list of tax havens on 5 December, but analysis by the Tax Justice Network, using the EU’s own criteria, suggests that the UK and 5 other EU countries would find themselves on that list if the criteria were applied equally to them.

The EU has stated that the list will only apply to non-EU member states and with the UK set to leave the Union in 2019, this could mean sanctions being applied to the UK unless it changes course and ends policies which make the country a tax haven. This includes the UK’s controlled foreign companies rules which allow UK based multinationals to hoard foreign profits in zero-tax countries. The UK’s CFC rules are currently the subject of a ‘state aid’ investigation by the European Commission.

The study also finds that up to 60 jurisdictions could be listed under the EU’s blacklist procedure, if the criteria are strictly applied. But there are fears that intense lobbying by the tax avoidance industry and some countries could see the list severely watered down. In addition to the UK, researchers have identified Ireland, The Netherlands, Cyprus, Luxembourg, Malta as countries that should be included in the blacklist if the EU were to apply its own criteria to member states.

Alex Cobham, chief executive of the Tax Justice Network, said: “The EU list is a step forward from previous efforts, in that the criteria are at least partially transparent and so partially objectively verifiable. It’s clear that the UK is at real risk of counter-measures from the EU. The government should forget any Brexit tax haven threat, which could easily open up EU counter-measures like the loss of financial passporting rights, and instead address the flaws in current policies.

“But it’s also true that the EU list lacks legitimacy as well as transparency, because it will not apply to its own members. For global progress on a truly level playing field, we need the G77 and G20 to engage in negotiating an international convention that would set an ambitious and fair set of minimum standards, with powerful sanctions, to which all jurisdictions would be held equally to account.”

Wouter Lips of Ghent University, who led the study, said: “The EU blacklist represents an important step forward from empty OECD lists – but the criteria need to be completely transparent to be objectively verifiable by independent researchers. Otherwise the risk remains that political power will be a factor in whether countries like the UK or indeed the USA are listed. Many of the 60 countries that are listed are lower-income countries which had no say in the OECD standards upon which much of the EU’s criteria depend, and that raises further questions of fairness.”