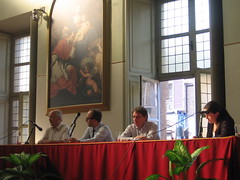 Just over a week ago was the 2nd Communia Workshop, which took place in Turin. The theme was ‘Global Science and the Economics of Knowledge-Sharing Institutions’ – and there was a great line up of scientists, economists, and legal scholars, as well as representatives from various research bodies and NGOs.

Papers, slides and audio will be published on the Communia website site in the near future.

Following are some highlights of the event: