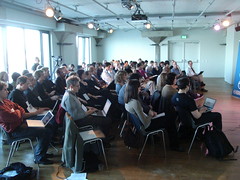 The third COMMUNIA workshop ‘Marking the public domain: relinquishment & certification’ (which we mentioned last week) took place in Amsterdam on Monday and Tuesday.

It brought together COMMUNIA members and other relevant parties from across Europe for talks and workshops focusing on legal issues related to the public domain, and how public domain works can be found and re-used.

There was a workshop on CC0 from a European perspective – which included interesting conversations with Jordan Hatcher of the PDDL. Mireille van Eechoud gave an informative presentation on Directive 2003/98/EC – on Public Sector Information, and its implementation across Europe.

Full documentation will be published by COMMUNIA in due course. Meanwhile, below are some rough notes from the opening session with James Boyle and Bernt Hugenholtz – which included a fascinating discussion on the history and future of the public domain in the EU and the US.