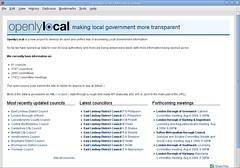 Openly Local is a recently launched “first draft of getting hold of and making accessible local government data in a consistent and useful form”.

There is generally a lot of support for open data from central government in the UK – particularly from the Office of Public Sector Information (OPSI), the Cabinet Office and with Gordon Brown’s recent announcement that he is asking Tim Berners-Lee to help open up government data in the UK. We are pleased to see that OKF Director Rufus Pollock’s call for Raw Data Now, which Sir Tim cited in a talk at TED, has played a prominent part in his advice!

However, open government data does not seem to receive such attention in local government.

Openly Local has made a start on opening up local government data:

To start off, I’ve concentrated on getting the basic information — current councillors, committees, membership of those committees, and minutes for those committee meetings. I started off with a little over a dozen councils (though that’s since increased to over 40 of them).

At the time of writing this includes information on: 61 councils, 3797 councillors, 2065 committees and 11922 committee meetings.