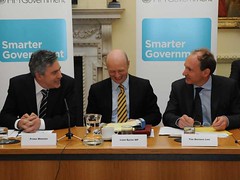 We are very pleased that it looks like the new datasets will be:

We’re also very proud that the new data.gov.uk site, the official registry of UK Government open datasets, is powered by CKAN (as we announced a couple of months ago). If you’re interested in following the latest development about this as they happen, please join the official mailing list.

The new Putting the Frontline First: Smarter Government initiative gives further detail on how the new data will be published. In particular, section 1.3. Radically opening up data and promoting transparency, gives a set of “public data principles”, which are as follows:

‘Public data’ are ‘government-held non-personal data that are collected or generated in the course of public service delivery’.

Our public data principles state that:

This is fantastic news – and we’ve highlighted key parts of the Prime Minister’s speech below:

Information is the key. An informed citizen is a powerful citizen.

[…] We are determined to be among the first governments in the world to open up public information in a way that is far more accessible to the general public.

So I am grateful to Sir Tim Berners-Lee and Professor Nigel Shadbolt for leading a project to ‘make public data public’.

This has enormous potential. Already more than 1,000 active users of the internet have registered their interest in working with government on this, and we have so far made around 1,100 datasets accessible to them.

And there are many hundreds more that can be opened up – not only from central government but also from local councils, the NHS, police and education authorities.

[…] In this way people will no longer be passive recipients of services but, through dialogue and engagement, active participants – shaping, controlling and determining what is best for them.

And I can announce today that we will actively publish all public services performance data online during 2010 completing the process by 2011. Crime data, hospital costs and parts of the national pupil database will go on line in 2010. We will use this data to benchmark the best and the worst and drive better value for money.

It will have a direct effect on how we allocate resources. We will introduce next year NHS tariffs based on best practice on the ground not average price. And we will be benchmarking the whole of the prison and probation system by 2011.

And we will give our frontline services greater freedoms and flexibilities to respond innovatively to this data, reducing the number of ring fenced budgets, rationalising different central funding projects and joining-up capital funding within a local area.

Releasing data can and must unleash the innovation and entrepreneurship at which Britain excels – one of the most powerful forces of change we can harness.

When, for example, figures on London’s most dangerous roads for cyclists were published, an online map detailing where accidents happened was produced almost immediately to help cyclists avoid blackspots and reduce the numbers injured.

And after data on dentists went live, an iphone application was created to show people where the nearest surgery was to their current location.

And from April next year ordnance survey will open up information about administrative boundaries, postcode areas and mid-scale mapping.

All of this will be available for free commercial re-use, enabling people for the first time to take the material and easily turn it into applications, like fix my street or the postcode paper.

And I can further announce today that, again from next April, we will also release public transport data hitherto inaccessible or expensive and release significant underlying data for weather forecasts for free download and re-use.