The following post is from Lisa Evans, who is doing research on UK public finance data sources as part of our Where Does My Money Go? project.

Freedom of information: sharing our experiences

I’ve been reading some debate on the extent to which Freedom of Information (FOI) requests are a drain on public resources. A frequently cited example is the University of East Anglia’s Climatic Research Unit (CRU). Phil Wallis MP describes how this CRU consisted of 3 scientists who were not used to getting the number of FOI requests they were getting:

“[the FOI requests] were coming in by the day at one particular time, so you can understand [the CRU’s] frustration”.

This leads to questions about the FOI law being used sensibly. This motivated me to share my experience of the FOI law: why it was necessary for me to request large chunks of government data, but also the effort that went into making the requests specific and useful.

The lifecycle of UK public funds

I’m doing research for the ‘Where Does My Money Go’ (WDMMG) project. The aim of the project is to visualise government spending through the ‘lifecycle’: from when money enters the system as tax to when it leaves as services etc.

As a team, one of the first places we looked for data detailing this ‘lifecycle’ was on HM Treasury website. There we found a couple of reports – the Country and Regional Analysis and the Public Expenditure Statistical Analysis – that told us, for example, the parts of the country that benefit from various public services.

These reports also gave the details of suitable contacts in HM Treasury, so after spending some time understanding the data and coming up with some sensible questions, I contacted them and they invited me to meet them a few days latter.

At this meeting I demonstrated our WDMMG prototype and talked about the goals of the project. The Treasury team explained a system called the Combined Online Information System or COINS (which we blogged about in February), which stores the two reports we were interested in and, in addition to this, even more detailed data about public spending . The Treasury team told me that COINS uses a database called Camelot. The photo on their website speaks volumes: 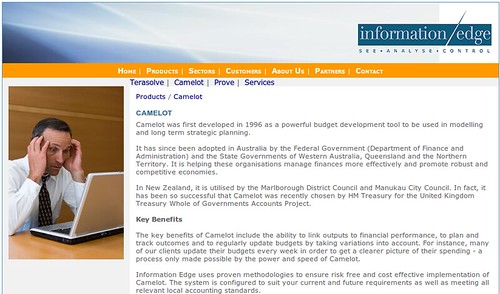 Obstacles to getting the data

I had heard of COINS before, for example I knew that some people had requested the whole database, including the BBC’s Martin Rosenbaum, who has been usefully documenting the appeal process he has been through for the COINS data.

Even though COINS was a relatively inexpensive piece of software, and so, one might assume, that it’s not too complex, it was clear at the time that finding out more about it would involve dealing with other complexity such as:
a) the sensitive data it stores (such as information about military defense spending) and b) the intellectual property agreement with Descisys.

As such, it was obvious that knowing more about the structure of the database would be helpful, as it would allow us to be specific about the data we need. The first thing I did was requested the COINS schema, what I got was the data fields with no description of what they mean, but it was a start!

The second thing I did, to understand the Intellectual Property Agreement HM Treasury had entered into with Descisys, was request a copy of the COINS contract. Here are the intellectual property rights from page 41 of the document.

The third thing I did was to request the COINS training materials to determine what reports are available and to get descriptions of the data fields we had.

Then the WDMMG team met our contacts at HM Treasury again, to talk through the COINS data structure.

As a result of these FOI requests and meetings the research team have been able to make very specific requests for fields of data, as seen in this request for the spending codes known as Programme Object Groups (POG). We’ve also been able to identify spending codes that offer greater detail that was previously public.

From this experience you can see that meeting and explaining the project with HM Treasury has been our first priority and in return they have often given more help and information than requested. But, despite being helpful HM Treasury have entered into an agreement that means they are restricted in what they can reveal.

Lessons for the future?

Based on the last few weeks of research, my recommendations for people doing similar work would be:

But sadly it will often be the case that government departments will have Intellectual Property Agreements that make asking for data much more complex that it really should be.