The following guest post is by Daniel Kaplan, Director of Fing (the Next-Generation Internet Foundation, France). Today he explores three possible futures for Open Public Data, and on Monday he will suggest ways to ensure that we are moving in the best direction.

We tend to assume that the opening up of public data will only produce positive outcomes for individuals, for society and the economy. But the opposite may be true. We should start thinking further ahead on the possible consequences of releasing public data, and how we can make sure they are mostly positive.

All of us who advocate the opening up of public (and other) data for reuse by citizens, researchers or entrepreneurs, hope that something good will come out of it. What “something” we have in mind probably differs. The same goes for what each of us considers “good”: I may believe that creating commercial value out of free-to-use public data is good, while others may not. I may hate crime maps because they stigmatize without solving anything, while others may think they save lives. That’s fine. In fact, that’s even the basic reason why we should support open data: because it provides the common grounds upon which different agents, with different motivations, will create different things – with God, or Darwin, eventually knowing their own.

Yet things may not be that simple. The opening up of public data is a vast, complex, never-ending process that encompasses thousands of different actors. It shifts information, power, and responsibilities, in ways that are difficult to foresee. Its consequences will probably be felt in many different areas: the business of service organizations, decisional software, participative democracy, job requirements for civil servants, budget funding of public agencies whose job it is to produce data, media economics and content, etc. And depending on how we open up public data, and on what we do on top of making data accessible, some of these consequences may be less positive than most of us would like.

So let’s start thinking in terms of consequences. Let’s imagine we won: A very significant share of “public-service information” (PSI) has become available for access and re-use, in machine-readable format, at little or (generally) no charge. A few years down the road, what consequences has it had on the daily lives of citizens and firms? On innovation and growth? On the ability of public agencies to reach public-interest goals (think environment or social care)? On democracy and public spirit?

The dominant story that we all tend to tell depicts a radiant future. Citizen groups expose corruption and abuse, and engage in informed public discussion leading to better decisions. They even contribute to enlarging the pool of public data, as can be seen on OpenStreetMaps. Large and small firms create all kinds of new and improved services, thus contributing to growth and quality of life. Scientists and data-journalists process masses of data in order to provide new insights on, say, climate change or urban dynamics. Public agencies co-operate with one another to eliminate redundancies, and with the public and citizen sector to provide better public services. Democracy finds a new youth through constant feedback, evaluation and debate.

Many examples, and a few studies, support this story. However, should we decide to deliberately look at the dark side of things, from the very same premises, it becomes just as easy to tell a quite opposite story. 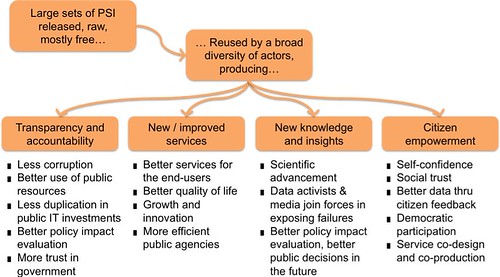 Peering into the dark side

Suppose, for example, that most of the innovative services that make use of public data are provided on a commercial basis, supported either by fees or by advertisement. In order to sustain themselves, they target the most affluent citizens and geographic areas. Having shown that they provide a much higher quality of service than public agencies do, they successfully lobby against “unfair competition” by the public sector. As a result, the public sector is limited to serving underprivileged populations, thus increasing inequalities in the face of once-public services.

The dark story of Open Public Data: What makes it less likely? 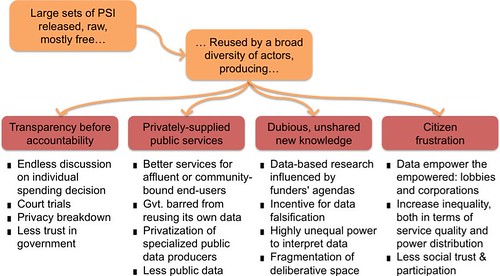 Another consequence of openness may be that those agencies whose job it is to produce, say, geographic or statistical data, no longer derive revenues from the sale of their data. Since no additional money will come from the Budget, much of this data will either cease to be produced, or be produced by private corporations. Opening up public data results in less public data…

Transparency may also produce unwanted consequences. Imagine that, instead of engaging in broad, calm discussions on common-interest issues, citizen groups and lobbies abuse it by bickering over every individual decision, every bit of public spending. Instead of producing broader support for wiser decisions, total transparency sets interests against one another, inhibits decision-making and reduces overall trust. In fact, the total accessibility of data provides a high incentive to tinker with the data themselves, in order to make sure that even independent, computer-intensive analyses will provide the results the data producers expect. Opening up public data results in skewed data…

Imagine, too, that the ability to interpret and use the masses of public data that have become available remains very unevenly distributed – not that big a leap of faith. In a paper aptly titled “Empowering the empowered?”, Mike Gurstein quotes a 2007 research paper on the digitization of land records in Bangalore: “Their findings were that newly available access to land ownership and title information in Bangalore was primarily being put to use by middle and upper income people and by corporations to gain ownership of land from the marginalized and the poor.” Even here in Europe, is it so difficult to believe that well-funded lobbies will make better use of data than small local groups? That researchers interested in processing these data will need to look for funds in corporate pockets with a stake in their results? Perhaps the “wisdom of crowds” will correct this imbalance, yet perhaps not.

When I first tested these two scenarios with the folks at Fing, they almost came up with a third story, that tells of limited and mostly disappointing results of open data. In this story, data end up being such a bag of complex, heterogeneous, hard-to-interpret material that few actors find the courage or the resources to seriously engage with them. The initial applications that we currently see entering competitions such as “Apps for Democracy” or “Show Us a Better Way” remain what they are today, that is, mostly proofs of concepts (or of their programmers’ skills), with at best anecdotal benefits for ordinary citizens. Most of them never make it to the market. Beautiful data visualizations do much for their designer’s fame and little to create a common understanding of complex phenomena. Only lobbies with very specific agendas dive into the datasets, where they find what they knew they wanted to find, with no one in a position to contradict them. After a few initial contributions to FixMyStreet and the likes, citizens become tired of having to do their municipality’s job. Open data hasn’t done much harm, but not much good either. 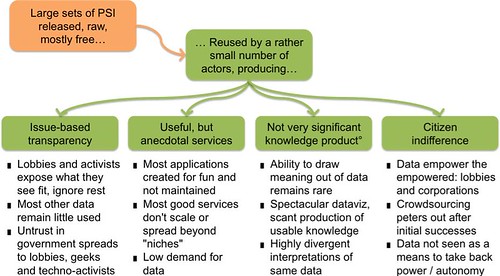 In my next post, I will look at how we might work towards maximising the positive benefits and avoiding the potential pitfalls of Open Public Data.