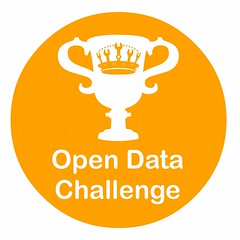 For a long while our Working Group on EU Open Data has been very keen to run a pan-European open data competition. Hence we’re very pleased to announced the opening of the Open Data Challenge, which is precisely such a competition.

The competition is open for the next 60 days and there are €20,000 in prizes up for grabs! As seems fitting for a pan-European initiative, the winners will be announced by EC Vice President Neelie Kroes in Brussels this coming June.

You can find out all the details at:

Following is our press release which went out with the launch:

Governments, IT companies, independent software developers and citizens team up to launch Europe’s biggest ever public data competition. €20,000 in prize money to be won in the Open Data Challenge.

The Open Data Challenge launches this week offering €20,000 in prize money to encourage people to think of interesting ways of reusing public data for the benefit of European citizens. The pan-European competition encourages those with programming skills to have a go at building their dream app using public data. But it doesn’t matter if you aren’t a computer geek. There’s a section of the competition called ‘Wouldn’t it be cool if…?’, which allows anyone to submit an idea for how to reuse public data.

Public bodies generate a huge amount of data about every aspect of our lives; everything from how our hard earned tax is spent to statistics about bicycle accidents on inner city roads. Much of this data never sees the light of day, and just sits gathering dust in a bureaucrat’s office, but this is changing.

Communities of software developers have emerged in the past few years with the aim of transforming government data into useful web and mobile applications for all to benefit from. For example in the UK, citizens can use services such as TheyWorkForYou.com to find out what their local representative says in parliament or WhereDoesMyMoneyGo.org to find out where their tax money is spent.

Mobile developers are using public data to develop apps to tell people about everything from train times to the locations of postboxes or cultural heritage sites. Large IT companies are also investing time and money in this area.

Neelie Kroes, European Commission Vice-President for the Digital Agenda, said: “I believe governments should embrace open data. This competition is a great opportunity to demonstrate why. And it comes at an appropriate moment to feed into our work on an update of the EU directive on the re-use of public sector information which forms the legal basis of much of the public open data available today.”

Sir Tim Berners-Lee, the inventor of the World Wide Web, and Transparency and Open Data Adviser to the UK Government, is on the competition’s judging panel. “Web apps can provide great benefit by combining open data from different sources and displaying it in exciting and intuitive ways,” Berners-Lee commented about the Open Data Challenge.

Professor Nigel Shadbolt sits on the UK government’s Public Sector Transparency Board. “Open data makes governments transparent, accountable and efficient. It can create social and economic value. At a European level open data could be transformative and this competition will show how,” he said.

The Open Data Challenge has been organized by the Open Knowledge Foundation and Openforum Academy, the sister organization of Openforum Europe, under the auspices of the Share-PSI.eu initiative.

Further details about the competition are available at: http://opendatachallenge.org/