The following guest post is by Montréal Ouvert, the open data organisation for the city of Montreal in Canada.

Montréal Ouvert is a citizens’ initiative to obtain a formal open data policy for the city of Montréal, Canada. Launched by four Montrealers in August 2010 to mobilize public and political support for the adoption of an open data policy for the city of Montreal, it has had considerable success. The online presence includes 567 Facebook Fans, 743 Twitter followers and tens of thousands of visits to its website. Over 1 year, Montréal Ouvert organised three public meetings, two hackathons, and presented at over 8 conferences – not to mention blogging, tweeting, report writing, media interviews and general communication in both official languages – no easy task!

Part of Montréal Ouvert’s success can be attributed to its demonstration of the benefits of open data for all city residents through practical applications. While Montréal Ouvert has not directly built software applications, it has coached, inspired, and connected developers to the local community so that they could create successful apps that, collectively, have garnered over 120,000 visits – not bad for a city of about 2 million people.

After half a year of campaigning, the city of Montréal formed a working group to evaluate the possibility of adopting an open data policy. The report is due in September 2011, just over a year after the launch of the citizens’ initiative. The implementation of the report and its recommendations are expected later this autumn. In the meantime, Montreal Ouvert is happy to share some of the key lessons in mounting a successful citizens’ initiative for open data.

Montréal Ouvert’s approach was purposefully collaborative from the outset. We designed a logo that elicited our desire to see an opening of city hall and our attachment to the identity of the city. 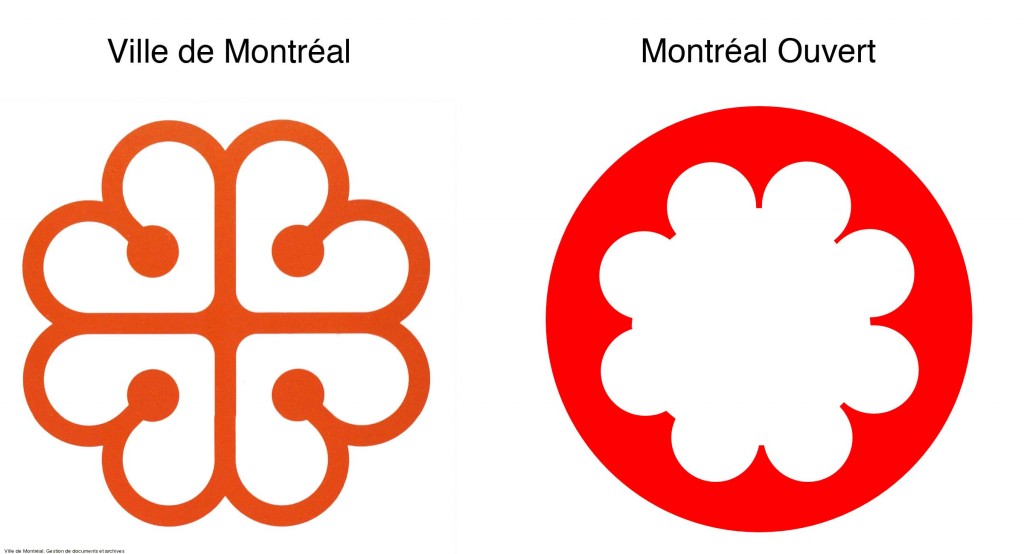 Though the aim was collaboration, with no open data policy Montreal was clearly lagging behind other North American cities, and the initiative made it clear it expected action. Nevertheless, Montréal Ouvert’s stated objective was to accompany the city towards the realization of our goal – not to shame it into action.

City residents from all walks of life – not just the developer community – were welcome to join the cause. And they did. Approximately 75 people came to Montreal Ouvert’s first public meeting, including city officials who had been waiting for civil society to help them make the case within the public administration. Montreal Ouvert had clearly launched at the right time!

The Montréal Ouvert team anticipated resistance to change at the city and consequently took a progressive and staged approach to the open-data issue.

a. First, Montreal Ouvert built and involved a network of civil society organizations and individuals to demonstrate the demand for open data. We needed to show that citizens were ready to meet the city half way.

b. Through a series of hackfests, Montreal Ouvert inspired a number of local developers to create web applications, including patinermontreal.ca, resto-net.ca, ZoneCone.ca, and budgetplateau.com, which have gathered over 120,000 visitors and nearly a million page views – designed to provide solutions to everyday problems confronted by Montreal residents. These concrete applications were fundamental to the demonstration of the value of city data – open data can be a nebulous idea for many non-tech people.

c. Thirdly, Montréal Ouvert made large efforts to reach out to city officials, especially within the IT department, to provide factual information about the benefits of open data, learn what challenges Montréal faced, and assure them that the costs for implementation would be minimal. Montreal Ouvert made it a point to identify and associate with allies inside the city administration who had the passion to carry open data as an initiative within their department and beyond.

Lastly, once a base of support had been built amongst citizens and public servants, Montréal Ouvert reached out to politicians who held key portfolios and decision-making powers.

3. Know what you’re getting into.

Running a citizen initiative like Montréal Ouvert is a serious commitment. It requires time, perseverance, and smart tactics. The blog has to be updated regularly with relevant content, responses to media requests must be answered promptly, Montreal Ouvert participated in numerous public city consultations and submitted official documents to raise awareness about the multi-faceted relevance of open data. Montreal being a bilingual city sometimes also meant extra work.

Very quickly, the hard work and networking will pay off. Montreal Ouvert quickly became a hot new initiative in the city and was invited to the local TEDx, community events, a PetchaKutcha for the design and developer community, university classes, and an annual forum between upcoming youth leaders and politicians. Meanwhile, Montreal Ouvert supporters and hackers were invited to hackfests, became front-page stories in the press, hosted their own public events, and gave guest lectures. Montréal Ovuert set a timeline of 1 year to achieve its stated goal of an open data policy for Montreal. Perhaps it’s because we’ve had so much fun in the process that we don’t mind extending our own deadline, but only by a few months.

Getting a public administration to adopt and implement a new way of operating is no small task. Anyone looking to build support in their community should be aware of the thousands of hours you’ll need to accomplish it.

4. Get the right people on the bus, then set the direction.

Montreal Ouvert’s four co-founders came from different backgrounds. Open data brought together a start-up entrepreneur, community organizer veteran, international political development consultant, and a data visualisation specialist. Each of us were interested in open data from a different perspective and brought different skills to the table. The key was to develop and agree on a consistent narrative and key tasks each could accomplish.

As the open data movement in Montreal built momentum, we formalised the contribution made by collaborators and recognized the help received from advisers. Montreal Ouvert elevated open data as a public issue in Montreal and Quebec because it adopted a collaborative approach. Citizen demand has made open data a politically attractive issue for many politicians as they realise that easy access to data and community support will become a cornerstone of 21st century governance. Montreal Ouvert has inspired other open data initiatives in Québec and is working to help ensure their success.

Though the city has yet to adopt an open-data policy, we have built a strong community base for city data once it is released. If your city or government does not yet have an open data policy, do not despair. With diligent hard work you too can have an open data mouvement in your city as long as you progressively build a network of collaboration and demonstrate concrete value to the politicians, public servants and citizens. Please do not hesitate to contact the team at info[at]montrealouvert[dot]net to learn more.