The following guest post is by Ramine Tinati from the University of Southampton. This is a little taster of what they’ll be talking about at the Open Government Data Camp next week in Warsaw – you can get tickets here!

The sustainability of Open Government Data is the product of a multitude of factors, all of which rely on the combination of good social and technological decisions. During the last 12
months, there has been increasing pressure on the use of the data released, supported by a flood
of hackathons (events where developers get together and create new applications), aiming
to make sure that all the published data is actually getting used (and importantly, the data is
being used to its full potential). There has been an excellent response to this: the developer
community has grown and matured, and well-produced, stable applications are starting to
appear.

Underlying all this is the need for the steady publication of large amounts of high quality
data. Making sure that this data is being released at regular intervals, at a rate which is
growing in volume deposit by deposit is critical for the continuous development of Open
Government Data. But how can we monitor the deposits of these Open Government Data
catalogs, tracking their activities to make sure that they are publishing steady deposits of
large amounts of data?

Over the last 4 months, with the use of ROAR (Registry of Open Access Repository –
available here) and data mining techniques, I have been tracking and
monitoring the deposit history of a number of Open Government Data catalogs, including the
United Kingdom, United States, Canada, New Zealand, Australia, Denmark and Spain. This
has provided a visual account to the deposit activities of these countries, highlighting some
interesting findings. 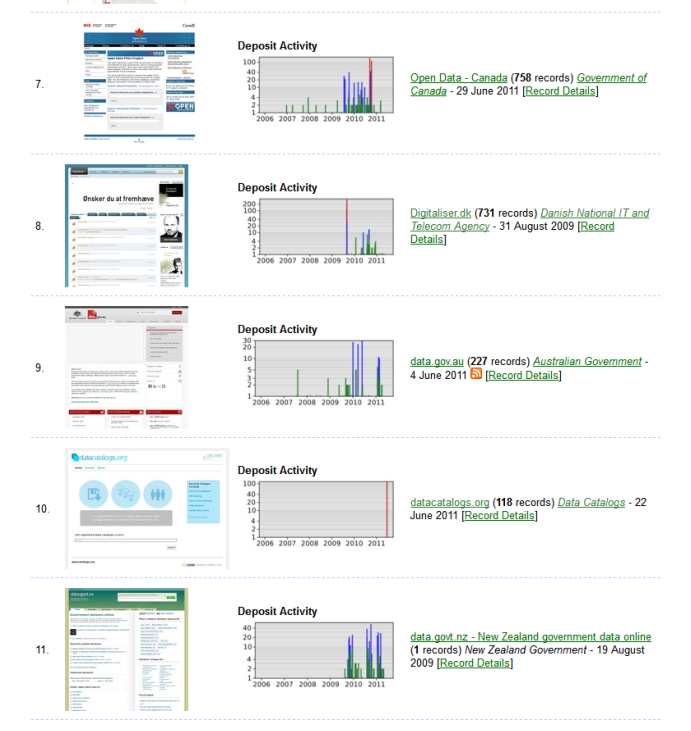 During the Open Government Data Camp I will be giving a lightning talk on my findings,
and would be happy to discuss how this could become an integral part of Open Government
Data sustainability.