The following guest post is by David Eaves who is the founder of datadotgc.ca and a member of the OKF’s Working Group on Open Government Data. The post originally appeared over on his blog.

With the International Open Data Hackathon getting closer, I’m getting excited. There’s been a real expansion on the wiki of the number of cities where people are sometimes humbly, sometimes grandly, putting together events. I’m seeing Nairobi, Dublin, Sydney, Warsaw and Madrid as some of the cities with newly added information. Exciting!

I’ve been thinking more and more about applications people can hack on that I think would be fun, engage a broad number of people and that would help foster a community around viable, self-sustaining projects.

I’m of course, all in favour of people working on whatever piques their interest, but here are a few projects I’m encouraging people to look at: 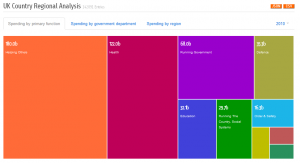 What I really like about openspending.org is that there are lots of ways non-coders can contribute. Specifically finding, scraping and categorizing budget data, which (sadly) is often very messy are things almost anyone with a laptop can do and are essential to getting this project off the ground. In addition, the reward for this project can be significant, a nice visualization of whatever budget you have data for – a perfect tool for helping people better understand where their money (or taxes) go. Another big factor in its favour… openspending.org – a project of the Open Knowledge Foundation who’ve been big supporters and sponsors of the international open data hackathon – is also perfect because, if all goes well, it is the type of project that a group can complete in one day.

So I hope that some people try playing with the website using your own local data. It would be wonderful to see the openspending.org community grow.

Some of you have already seen me blog about this app – a project that comes out of Code for America. If you know of a government agency, or non profit, that has lat/long information for a resource that it wants people to help take care of… then adopt a hydrant could be for you. Essentially adopt a hydrant – which can be changed to adopt an anything – allows people to sign up and “adopt” what ever the application tracks. Could be trees, hydrants, playgrounds… you name it.

Some of you may be wondering… why adopt a hydrant? Well because in colder places, like Boston, MA, adopt a hydrant was created in the hopes that citizens might adopt a hydrant and so agree that when it snows they would keep the hydrant clear of snow. That way, in case there is a fire, the emergency response teams don’t end up wasting valuable minutes locating and then digging out the hydrant. Cool eh?

I think adopt a hydrant has the potential of become a significant open source project, one widely used by cities and non-profits. Would be great to see some people turned on to it!

What I love about mapit is that it is the kind of application that can help foster other open data applications. Created by the wonderful people over at Mysociety.org this open source software essentially serves as a mapping layer so that you can find out what jurisdictions a given address or postal code or GPS device currently sits in (e.g. what riding, ward, city, province, county, state, etc… am I in?). This is insanely useful for lots of developers trying to build websites and apps that tell their users useful information about a given address or where they are standing. Indeed, I’m told that most of Mysociety.org’s projects use their instance of MapIt to function.

This project is for those seeking a more ambitious challenge, but I love the idea that this service might exist in multiple countries and that a community might emerge around another one of mysociety.org’s projects.

No matter what you intend to work on, drop me a line! Post it to the open data day mailing list and let me know about it. I’d love to share it with the world.