The following post is by Theodora Middleton, the OKF’s blog editor. 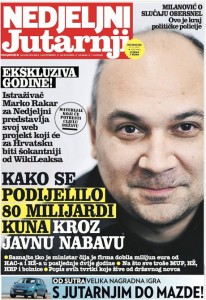 Government transparency has been making the headlines over in Croatia, thanks to the amazing work of Marko Rakar, Croatia’s leading transparency expert. He has secured the release of all the public procurement data for government spending, dating back to July 1st 2009 in a fully searchable format. The database includes about 58,000 individual contracts totally 80 billion Croatian kuna (or about $15-$16 billion) covering more than 13,000 companies, which allows you to see which agency ordered what goods and services, and who received each contract. Marko Rakar has made a name for himself in Croatia and internationally for his corruption-busting data releases, including his release of the country’s fraud-ridden voter files, and the release of a database of war veterans that also demonstrated massive fraud – for which he was arrested (although charges were later dropped).

A search by contractors shows their overall procurement record (how many contracts, what type of contract, what amount of money is involved and to whom was sold goods and services). The database, which is modeled on FedSpending.gov but in some ways more detailed, also allows a user to see how dependent a company is on government contracts.

This information was theoretically already available on official government websites, but it was essentially useless. Customer names and supplier names aren’t shown on the same page; you can’t search by other criteria; and the data only goes back two months, after which it is removed. Rakar worked with colleagues to collect all the data going back 27 months, and then machine-processed and indexed them. So far, in its first two days, the site has had 56,000 unique visits (for a nation of two million internet users).

The new release is already bearing fruit, as Marko reported to TechPresident:

We have found a number of companies which appear to be founded only to service a single government contract. Journalists have already found a number of companies which have a number of multimillion contracts and are at the same time huge donors to the ruling party. We have found a horse farm which bid on and won a contract to lay underground power cable, we have found a company which is related to the Speaker of the House which reports unusually high profit rates (50% and above) worth millions (both in Croatian and US currency) and which primarily deals with advertising in public spaces (schools, hospitals and similar). We have found one company which belonged to the Minister of Interior which also received multimillion security related contracts with the government (while he is still in the office).