Last night was the first OKFN Meet-Up in Scotland* at the Ghillie Dhu, Edinburgh, run in collaboration with DevCSI. 19 people attended from around the city and nearby, including Glasgow, and those visiting for the Open Biblio Sprint represented Cambridge, London, Wolverhampton and the Netherlands.

The Auditorium was a beautiful venue, and there was a good space for giving presentations complete with seamless audio and visual equipment (a rare treat!). 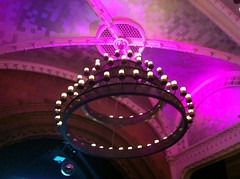 We kicked off with the first three Lightening Talks:

It was great to see people gravitating towards those whose presentations had struck a chord… Mahendra had invited discussion around potential events and many people had plans or ideas which they wanted to run past him, while Rod’s points on taxonomy were pertinent to Mark’s work on BibServer as well as others’ research. Other discussions grew between the bar snacks, as people began with the standard ‘what do you do?’ and swiftly developed into ‘oh that’s funny, I was talking to so-and-so about that just now…’ Our dedicated bartender was contributing too, as he specialised in nanotechnology!

The next three talks followed:

The hubbub of enthusiasm started up again, and it appeared there were good conversations and connections emerging around the room. From these, or perhaps just courage from having seen others do their presentations (and me fumbling along as make-shift compère), two additional people decided to give impromptu talks:

Many thanks to all those who presented and to those who attended to discuss all things #OpenData. Hopefully everyone left with good ideas of topics and people to follow up with afterwards, and who knows where these will lead? 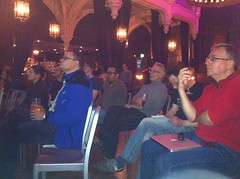 As this was our first Scotland-based Meet-up we’d be glad to get feedback so we can improve; the next one is planned for May, so if you have anything you’d particularly like to see, hear or say, let us know (one suggestion was that talks are recorded, so people unable to attend can keep up-to-date). This and other events will be promoted via the OKFN Scotland List, so do sign up here otherwise you might miss out!

* It turns out there was an event in Scotland in 2010, according to people who have been on the scene longer than I… see here for comments on the Open Biblio blog post which highlight previous activity, and many thanks to the people who kindly contributed this information. Here’s to the next one :-)

Naomi joined Open Knowledge Foundation in 2011. At various points she has been involved with administration, finance, project management, HR, the community network, events, communications, and other miscellaneous areas where a helping hand was needed.