Thessaloniki is a vibrant, sun-drenched beachfront city in Northern Greece. It is famous for its impressive historical lineage, its frappé coffee culture and its diverse population augmented by academics and students from the largest university in the Balkans. A few weeks ago, I learned something else unexpected: the city is also a veritable mecca for innovative community initiatives that link concepts about open data, transparency, government accountability and ‘smart cities ‘ in new and interesting ways. 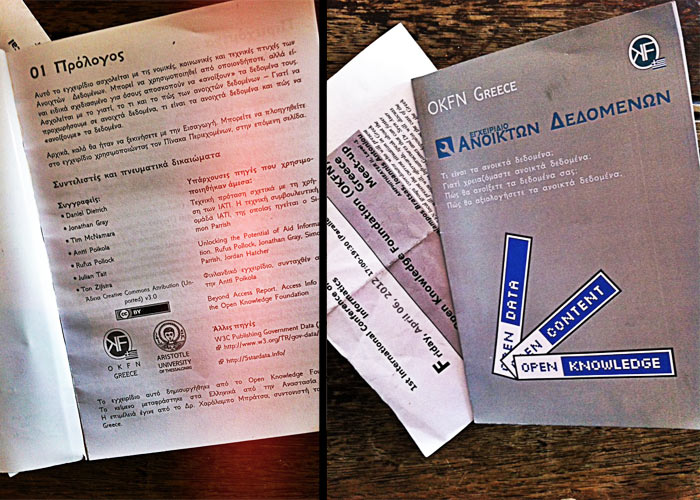 I had arrived there to provide kick-starting support to the new OKFN:LOCAL Greece group that had recently been created by Prof Charalampos Bratsas and several of his colleagues at Aristotle University and to explain the vision of the OKFN’s global chapters network. However, as I leapt from the plane into the midst of the 1st International Conference on Medical Education Informatics where the OKFN:LOCAL group had organised a lecture track on “Open Knowledge”, I realised the truth: I was about to learn a great deal myself about the international potentiality of open data.

The event, OKFN:LOCAL Greece’s second (details here), was marked by an exciting release – several hundred copies of the Open Data Handbook, translated into Greek, had been printed and were being distributed for free. It was the first time we’ve ever seen a local community publish the Handbook in paper form to be shared with the public, so it was amazing to see it in the hands of many students, professors and friends throughout the time I spent in Thessaloniki. 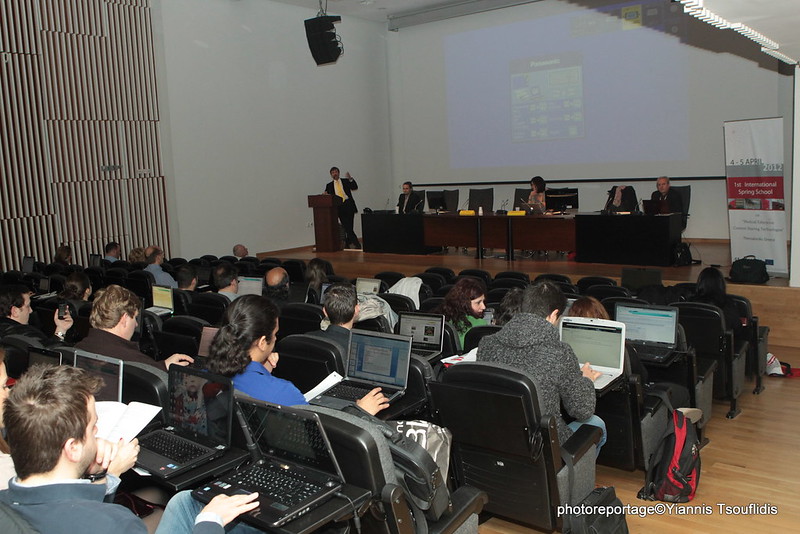 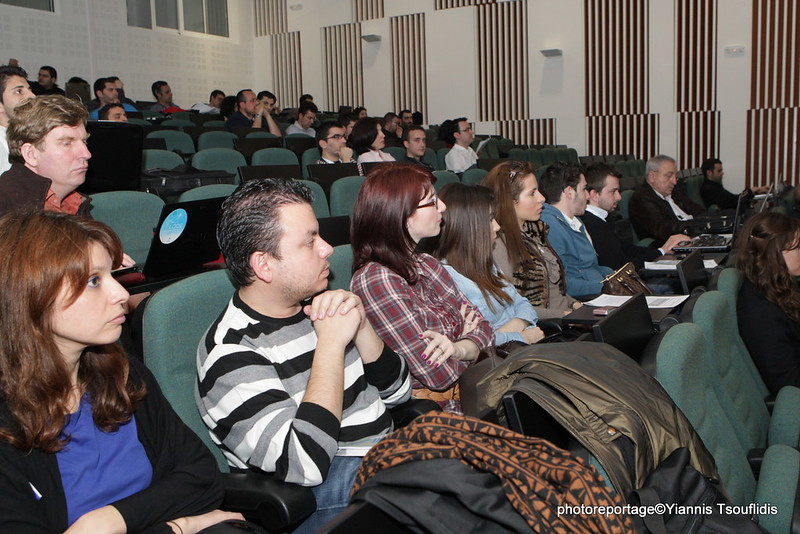 The OKFN:LOCAL group had also brought together some of the biggest names in the region for the evening’s programme, which featured several members of the OKFN:LOCAL Greece Steering Committee, including Prof Ioannis Antoniou, Prof Panos Bamidis who also organised the MIE2012 conference, Prof Nicos Komninos, Prof George Metaketis, Prof Pull Spirakis, Marinos Papadopoulos with Creative Commons Hellas, Kostantinos Stampoulis with Wikimedia Greece and Soren Auer. Each spoke about his own perspective regarding open knowledge in the region, featuring discussions ranging from open data innovation to open data and evolutionary games to linked data to open educational data and open licensing.

It was a prodigious turnout with a diverse audience – faces both young and old of many different backgrounds – and I found myself increasingly impressed by the breadth of opinion amongst the individuals I met in Thessaloniki. Each person I spoke to interpreted ‘openness’ in a different way, shared a unique perspective on the causes of the debt crisis, and had their own ideas about how to engage new participants in their work. The main characteristic I saw uniting such a varied group was their passionate commitment towards provoking positive change within Greece. Coming from the UK, it was an inspiring thing to see.

Indeed, the OKFN:LOCAL Greece group has wasted no time in getting things moving. With a team of researchers, students, academics and community-builders from Aristotle University’s faculty of MSc WebScience and Medical Informatics, the URENIO Smart Cities initiative, Wikimedia, Creative Commons and other organisations, they have already used existing data management systems like the Data Hub to build an impressive suite of Greece-focused visualisations and installments.

These include the facilitation of projects such as FIREBALL, an European Commission-funded initiative which connects communities involved in Living Labs and urban policy, and ICOS, a new global community for intelligent and open source-focused cities. Students in the Webscience MSc programme at Aristotle University have also conducted an assessment of the current status of open data in Greece, finding that Greek datasets lie between 2-3 stars of Tim Berners-Lee’s 5 star open data quality scheme.

In the future, as the OKFN:LOCAL Greece group matures into an incubating regional chapter, its community members plan to translate and host a Greek version of CKAN at the university and populate it with data acquired through those working with the university’s Semantic Web Unit. Other plans include using OpenSpending with a subset of Cl@rity’s Government Linked Open Data (LOD) project (an effort of the Greek government to publish decrees on the Web in raw file formats with metadata) and producing visual representations from datasets in the Greek LOD Cloud. 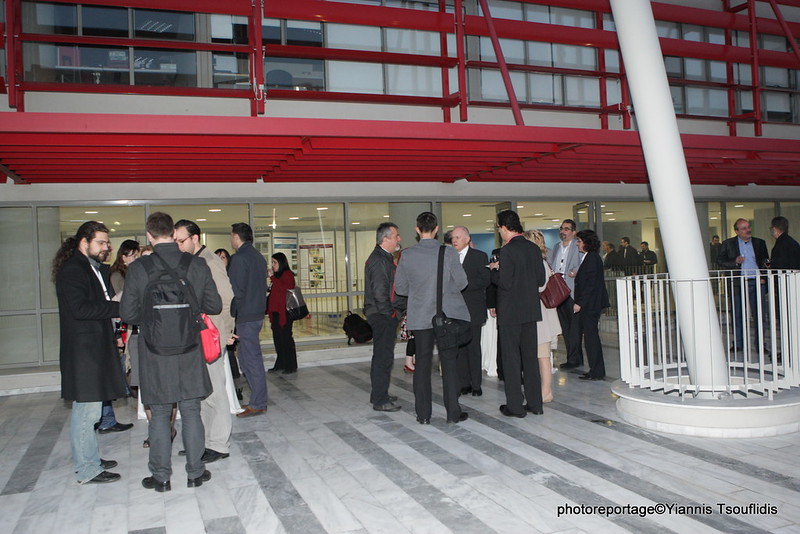 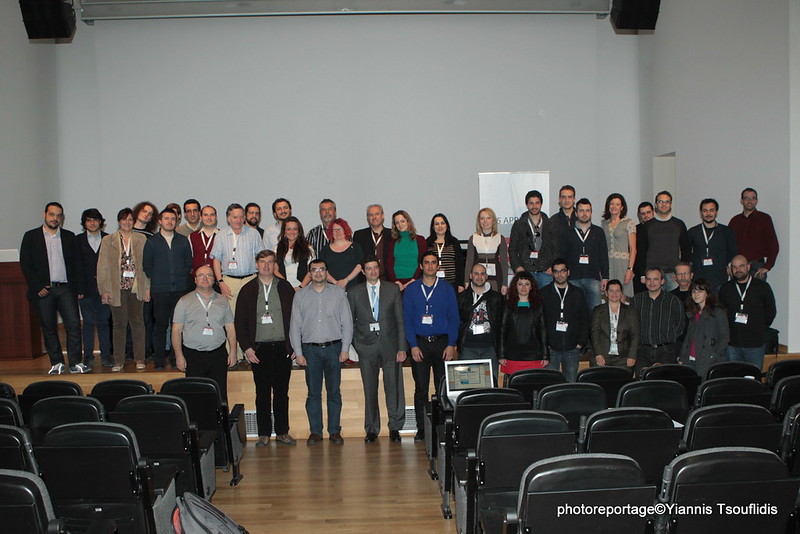 In ending, I’d like to give my heartfelt thanks to all of the OKFN:LOCAL members I met Thessaloniki, whose passion for this work has left me feeling quite excited about what’s next to come in the future of this emergent community. I have no doubt that despite the current economic complexities the nation faces, the path towards openness and transparency in Greece will be an interesting one.

Slides from the meetup can be found here. For more information about the many current projects of OKFN:LOCAL Greece, go here, and to get updated on upcoming events and ideas, check out their blog and @okfngr on Twitter.

All photos have been provided by the OKFN:LOCAL Greece group and on Flickr here.