This blog is cross-posted from the OKFN’s Open Economics blog. 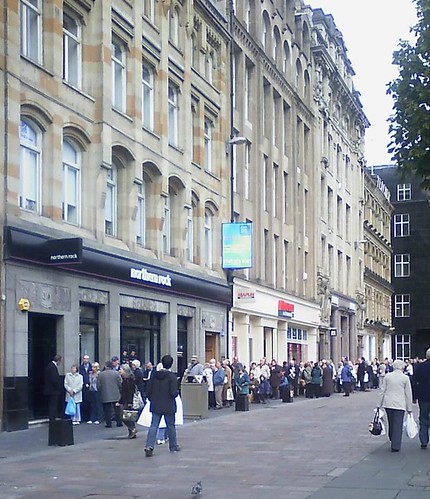 This fall marked the five year anniversary of the collapse of UK-based Northern Rock in 2007. Since then an unknown number of European banks have collapsed under the weight over plummeting housing markets, financial mismanagement and other reasons. But how many European banks did actually crash during the crisis?

In the United States, the Federal Deposit Insurance Corporation keeps a neat Failed bank list, which has recorded 496 bank failures in the US since 2000.

Europe however, and for that matter the rest of the world, still lack similar or comparable data on how many banks actually failed since the beginning of the crisis. Nobody has collected data on how many Spanish cajas actually crashed and how many troubled German landesbanken actually went under.

At the Open Economics Skype-chat earlier this month it was agreed to take the first steps for creating a Failed Bank Tracker for Europe at an upcoming “Data party”:

We hope that a diverse group of you will join in the gathering of failed bank data. During the Data Party you will have plenty of chances to discuss al questions regarding bank failures whether they be specific cases. Do not let your country or region leave a blank spot when we draw up the map of bank failures.

At the data party we will go through some of these questions:

You can join the Data party by adding your name and skype ID here.

Getting good data: What makes a failed bank?

For this first event collecting data on failed European banks should provide more than enough work for us. At this moment neither the European Commission, Eurostat nor the European Banking Authority are keeping any records of bank failures like in the FDIC in the US. The best source of official European information available is from DG Competition, which keeps track of approved state aid measures in member states in their State Aid database. Its accuracy is however limited as it contains cases from state intervention with specific bank collapses to sector wide bank guarantee schemes.

A major reason for the lack of data on bank failures is the fact that legislation often differs dramatically between countries in terms of what actually defines a bank failure. In early 2012 I asked the UK regulator FSA, if they could provide a list of failed banks similar to the list from FDIC in the US. In a response the FSA asserted that the UK did not have a single bank failures since 2007:

The statement from FSA demonstrate that, for instance Northern Rock, which brought a £ 2bn loss on UK taxpayers, never officially failed, due to the fact that it never entered administration. The example from FSA demonstrates that collecting data on bank failures would be  interesting and useful.

Earlier this year I got a head start on the data collection when a preliminary list of failed banks, were collected from both journalists and national agencies such as the Icelandic the Financial Supervisory Authority. The first 65 banks entered in the tracker, mostly from Northern Europe are available here.

Looking forward to bring data on failed banks together at the Data Party.