Following some
remarks from Richard Swetenham from the European Commission, we
made a few changes relative to the trialogue process and the coming
steps: the trialogue will start its meetings on 17th December and it
is therefore already very useful to call on our governments to support
Open Formats!

When we work on building all these amazing democratic transparency collaborative tools all over the world, all of us, Open Data users and producers, struggle with these incredibly frustrating closed or unexploitable formats under which public data is unfortunately so often released: XLS, PDF, DOC, JPG, completely misformatted tables, and so on.

The EU PSI directive revision is a chance to push for a clear Open Formats definition!

As part of Neelie Kroes’s Digital Agenda, the European Commission recently proposed a revision of the Public Sector Information (PSI) Directive widening the scope of the existing directive to encourage public bodies to open up the data they produce as part of their own activities.

The revision will be discussed at the European Parliament (EP), and this is the citizen’s chance to advocate for a clear definition of the Open Formats under which public sector information (PSI) should be released.

We believe at Regards Citoyens that having a proper definition of Open Formats within the EU PSI directive revision would be a fantastic help to citizens and contribute to economic innovation. We believe such a definition can be summed-up to in two simple rules inspired by the Open Knowledge Foundation’s OpenDefinition principles:

Those are the principles we advocated in a policy note on Open Formats we published last week and sent individually to all Members of the European Parliament (MEPs) from the committee voting on the revision of the PSI directive last thursday.

Good news: the first rule was adopted! But the second one was not. How did that work?

ITRE vote on Nov 29th: what happened and how? 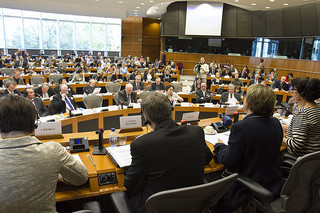 A meeting at the European Parliament
CC-BY-ND EPP Group

The European parliamentary process first involves a main committee in charge of preparing the debates before the plenary session, in our case the Industry, Research and Energy committee (ITRE). Its members met on 29th November around 10am to vote on the PSI revision amongst other files.

MEPs can propose amendments to the revision beforehand, but, to speed up the process, the European Parliament works with what is called “compromise amendments” (CAs): the committee chooses a rapporteur leading the file in its name and each political group gets a “shadow rapporteur” to work together with the main rapporteur. They all study the proposed amendments together and try to sum them up in a few consensual ones called CAs, hence leading MEPs to pull away some amendments when they consider their concerns met. During the committee meeting, both kinds of amendment are voted on in accordance with predefined voting-list indicating the rapporteur’s recommandations.

Regarding Open Formats, everything relied on a proposition to add to the directive‘s 2nd article a paragraph providing a clear definition of what an Open Format actually is. The rapporteurs work led to a pretty good compromise amendment 18, which speaks pretty much for itself:

« An open format is one that is platform independent, machine readable, and made available to the public without legal, technical or financial restrictions that would impede the re-use of that information. »

This amendment was adopted, meaning this change will be proposed as a new amendment to all MEPs during the plenary debate. Given that it has the support of the rapporteur in the name of the responsible committee, it stands a good chance of being carried.

Regarding the open development process condition, MEP Amelia Andersdotter, shadow rapporteur for the European Parliament Greens group, maintained and adapted to this new definition her amendment 65:

« "open format" means that the format’s specification is maintained by a not-for-profit organisation the membership of which is not contingent on membership fees; its ongoing development occurs on the basis of an open decision-making procedure available to all interested parties; the format specification document is available freely; the intellectual property of the standard is made irrevocably available on a royalty-free basis. »

Even though it also got recommanded for approval by the main rapporteur, unfortunately the ALDE and EPP groups were not ready to support it yet and it got rejected.

Watching the 12 seconds during which the Open Formats issues were voted is a strange experience to anyone not familiar with the European Parliament, since most of the actual debate happens beforehand between the different rapporteurs, the committee meeting mainly consists of a succession of raised hand votes calls, which are occasionally electronically checked. Therefore, there are no public individual votes or records of these discussions available and the vote happens very quickly.

What next? Can we do anything?

Now that the ITRE committee has voted, its report should soon be made available online

As the European institutions work as a tripartite organisation, the text adopted by the ITRE committee will now be transferred to both the European Commission and Council for approval. This includes a trialogue procedure in which a consensus towards a common text must be driven. This is an occasion to call on our respective national governments to push in favor of Open Formats in order toc maintain and improve the definition which the EP already adopted.

The text which comes out of the tripartite debate will be discussed in plenary session, planned at the moment for 11th March 2013. Until noon on the Wednesday preceding the plenary, MEPs will still have the possibility to propose new amendments to be voted on at plenary: they can do so either as a whole political group, or as a group of at least 40 different MEPs from any groups.

Possible next steps to advocate Open Formats could therefore be the following:

In any case, contacting MEPs to raise concerns on Open Formats policies can of course always be useful at all times before and after the plenary debates. Policy papers, amendments proposals, vulgarisation documents, blogposts, open-letters, a petititon, tweets, … It can all help!

To conclude, we would like to stress once again that Regards Citoyens is an entirely voluntary organisation without much prior experience with the European Parliament. This means help and expertise is much appreciated! Let’s get all ready to defend Open Formats for European Open Data in a few weeks!

Regards Citoyens is a french organization of citizens volunteering from all regions to work together on providing a better understanding of the French democratic institutions by re-using public information. We actively promote public Open Data principles in France since 2009 and we create web projects using public data to provide tools for a better dialogue between citizens and representatives. Our most known initiative is a parliamentary monitoring website: NosDeputes.fr. Find out more at RegardsCitoyens.org