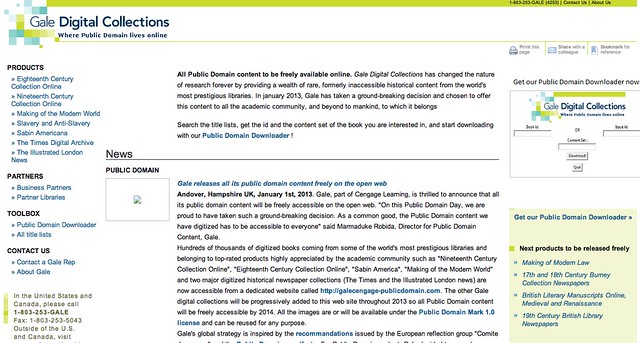 Earlier today we received a strange and intriguing press release from a certain ‘Marmaduke Robida’ claiming to be ‘Director for Public Domain Content’ at Gale Cengage’s UK premises in Andover. Said the press release:

Gale, part of Cengage Learning, is thrilled to announce that all its public domain content will be freely accessible on the open web. “On this Public Domain Day, we are proud to have taken such a ground-breaking
decision. As a common good, the Public Domain content we have digitized has to be accessible to everyone” said Marmaduke Robida, Director for Public Domain Content, Gale.

Hundreds of thousands of digitized books coming from some of the world’s most prestigious libraries and belonging to top-rated products highly appreciated by the academic community such as “Nineteenth Century Collection Online”, “Eighteenth Century Collection Online”, “Sabin America”, “Making of the Modern World” and two major digitized historical newspaper collections (The Times and the Illustrated London news) are now accessible from a dedicated websit. The other Gale digital collections will be progressively added to this web site throughout 2013 so all Public Domain content will be freely accessible by 2014. All the images are or will be available under the Public Domain Mark 1.0 license and can be reused for any purpose.

Gale’s global strategy is inspired by the recommandations issued by the European reflection group “Comite des sages” and the Public Domain manifesto. For Public Domain content, Gale decided to move to a freemium
business model : all the content is freely accessible through basic tools (Public Domain Downloader, URL lists, …), but additional services are charged for. “We are confident that there still is a market for our products. Our state-of-art research platforms offer high quality services and added value which universities or research libraries are ready to pay for” said Robida.

A specific campaign targeted to national and academic libraries for promoting the usage of Public Domain Mark for digitized content will be launched in 2013. “We are ready to help the libraries that have a digitization programme fulfill their initial mission : make the knowledge accessible to everyone. We also hope that our competitors will follow the same way in the near future. Public Domain should not be enclosed by paywalls or dubious licensing terms” said Robida.

The press release linked to a website which proudly proclaimed:

All Public Domain content to be freely available online. Gale Digital Collections has changed the nature of research forever by providing a wealth of rare, formerly inaccessible historical content from the world’s most prestigious libraries. In january 2013, Gale has taken a ground-breaking decision and chosen to offer this content to all the academic community, and beyond to mankind, to which it belongs

This was met with astonishment by members of our public domain discussion list, many of whom suspected that the news might well be too good to be true. The somewhat mysterious, yet ever-helpful Marmaduke attempted to allay these concerns on the list, commenting:

I acknowledge this decision might seem a bit disorientating. As you may know, Gale is already familiar to give access freely to some of its content […], but for Public Domain content we have decided to move to the next degree by putting the content under the Public Domain Mark.

Several brave people had a go at testing out the so-called ‘Public Domain Downloader’ and said that it did indeed appear to provide access to digitised images of public domain texts – in spite of concerns in the Twittersphere that the software might well be malware (in case of any ambiguity, we certainly do not suggest that you try this at home!).

I quickly fired off an email to Cengage’s Director of Media and Public Relations to see if they had any comments. A few hours later a reply came back:

This is NOT an authorized Cengage Learning press release or website – our website appears to have been illegally cloned in violation of U.S. copyright and trademark laws. Our Legal department is in the process of trying to have the site taken down as a result. We saw that you made this information available via your listserv and realize that you may not have been aware of the validity of the site at the time, but ask that you now remove the post and/or alert the listserv subscribers to the fact that this is an illegal site and that any downloads would be in violation of copyright laws.

Sadly the reformed Gale Cengage – the Gale Cengage opposed to paywalls, restrictive licensing and clickwrap agreements on public domain material from public collections, the Gale Cengage supportive of the Public Domain Manifesto and dedicated to liberating of public domain content for everyone to enjoy – was just a hoax, a fantasm. At least this imaginary, illicit doppelgänger Gale gives a fleeting glimpse of a parallel world in which one of the biggest gatekeepers turned into one of the biggest liberators overnight. One can only hope that Gale Cengage and their staff might – in the midst of their legal wrangling – be inspired by this uncanny vision of the good public domain stewards that they could one day become. If only for a moment.

2 thoughts on “Did Gale Cengage just liberate all of their public domain content? Sadly not…”