The BRAIN (Brain Research Through Advancing Innovative Neurotechnologies) initiative will “accelerate the development and application of new technologies that will enable researchers to produce dynamic pictures of the brain that show how individual brain cells and complex neural circuits interact at the speed of thought”.

As well as trying to vastly improve scientific understanding of “the three pounds of matter that sits between our ears”, it is hoped that this research will enable new forms of prevention and treatment for conditions like Alzheimer’s, Parkinson’s, autism and epilepsy.

In his speech, Obama made several comparisons between the BRAIN initiative and the Human Genome Project, an initiative which saw
unprecedented international collaboration and data sharing between research centres around the world to map the tens of thousands of genes of the human genome. Dr Francis Collins, who led the Human Genome Project and is the current Director of the National Institutes of Health, spoke alongside Obama at the announcement.

While there has been no explicit announcement about whether or not the BRAIN initiative will be open access (and while there are obviously difficult ethical and privacy issues in this field), we hope that it will follow in the footsteps of the Human Genome Project’s pioneering approach to data sharing – which saw data being placed into the public domain by default, without restrictions on its use and redistribution. This helped to minimise duplication, maximise synergy and ultimately to accelerate the pace of research in this area.

There was a rival initiative to the Human Genome Project from a private company called Celera, which aimed to create its own subscription database of the human genome, and to patent over 300 genes. Martin Bobrow, a representative for the Human Genome Project, later said: “Celera’s requirements seemed to amount to them establishing an effective monopoly over the human genome.” If they had succeeded the consequences to scientific research and innovation in this area could have been devastating.

With its mixture of public and private investment and public and private research organisations, all with different interests and different approaches to sharing, there is a danger that Obama’s new brain mapping initiative could fracture into silos of separate researchers and groups, duplicating work, competing against each other and claiming exclusive control and commercialisation over the fruits of their research.

Given the strong focus on US innovation in President Obama’s speech, it is also not clear how the initiative will collaborate with other initiatives such as the European Commission’s recently announced €1 billion Human Brain Project, which looks to have at least some overlapping aims and goals to Obama’s new initiative.

While the EC will be requiring open access to research funded by their Horizon 2020 programme, it is not yet clear whether the U.S. Office of Science and Technology Policy (OSTP)’s recent announcement in support of open access will apply to the BRAIN initiative.

We hope that President Obama’s new brain mapping initiatives will adopt a strong and principled commitment to open access and international collaboration, so that the world can benefit from accelerated and more impactful research around mapping the human brain in the same way that it has with the human genome. 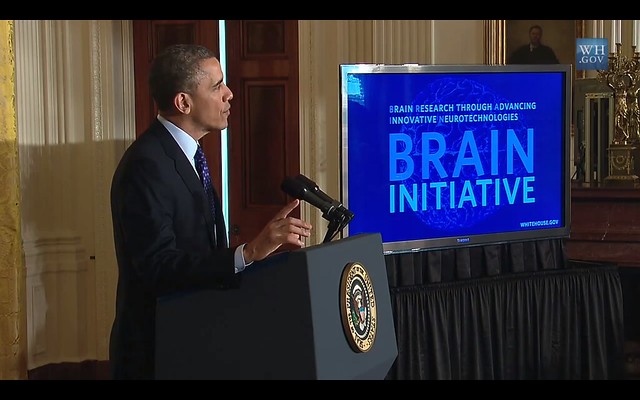 If you’re interested in following our work in this area, you can join our open-science discussion list by filling in your details in the form below: