This blog post is cross-posted from the Open Economics Blog.

Another economics scandal made the news last week. Harvard Kennedy School professor Carmen Reinhart and Harvard University professor Kenneth Rogoff argued in their 2010 NBER paper that economic growth slows down when the debt/GDP ratio exceeds the threshold of 90 percent of GDP. These results were also published in one of the most prestigious economics journals – the American Economic Review (AER) – and had a powerful resonance in a period of serious economic and public policy turmoil when governments around the world slashed spending in order to decrease the public deficit and stimulate economic growth.

Yet, they were proven wrong. Thomas Herndon, Michael Ash and Robert Pollin from the University of Massachusetts (UMass) tried to replicate the results of Reinhart and Rogoff and criticised them on the basis of three reasons:

The implications of these results are that countries with high levels of public debt experience only “modestly diminished” average GDP growth rates and as the UMass authors show there is a wide range of GDP growth performances at every level of public debt among the twenty advanced economies in the survey of Reinhart and Rogoff. Even if the negative trend is still visible in the results of the UMass researchers, the data fits the trend very poorly: “low debt and poor growth, and high debt and strong growth, are both reasonably common outcomes.” 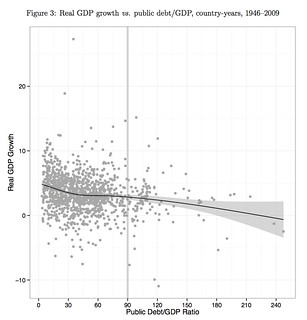 What makes it even more compelling news is that it is all a tale from the state of Massachusetts: distinguished Harvard professors (#1 university in the US) challenged by empiricists from the less known UMAss (#97 university in the US). Then despite the excellent AER data availability policy – which acts as a role model for other journals in economics – the AER has failed to enforce it and make the data and code of Reinhart and Rogoff available to other researchers.

Coding errors happen, yet the greater research misconduct was not allowing other researchers to review and replicate the results through making the data openly available. If the data and code were made available upon publication in 2010, it may not have taken three years to prove these results wrong, which may have influenced the direction of public policy around the world towards stricter austerity measures. Sharing research data means a possibility to replicate and discuss, enabling the scrutiny of research findings as well as improvement and validation of research methods through more scientific enquiry and debate.

The Open Economics Working Group advocates the release of datasets and code, along with published academic articles, and provides practical assistance to researchers who would like to do so. Get in touch if you would like to learn more by writing us at economics [at] okfn.org and signing up to our mailing list.

1 thought on “Reinhart-Rogoff Revisited: Why we need open data in economics”