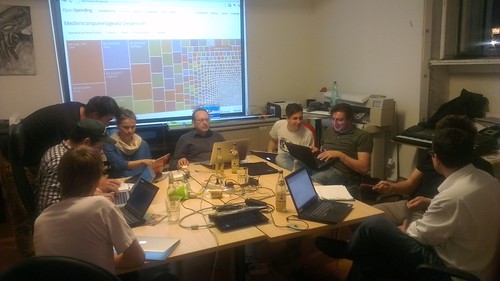 For your delectation, we bring you the third installment of Global Community Stories – a round up of the fantastic projects and activities of our Local Groups across the world, including a Wikipedia Editathon for girls in Nepal, a multitude of events in Belgium, Big Data Week across Spain, a Swiss Government pilot project, a multicultural open data event in Edinburgh, and a tiny town in Austria taking the lead in releasing data sets – the race is on!

Following the incredibly kind donation of OpenBelgium.be to our Open Knowledge community by Wunderkraut, OKF Belgium is preparing to take on maintenance of the site and grow the community that they began. They’ve been busy developing other collaborations too; a meet up with Random Hacks of Kindness is coming up June 1-2, as well as developing appsforgeo.be. Their impressive upcoming events include a fully booked master class on Open Culture data, a presentation at the Flemish government to civil servants, as well as Apps for Flanders on June 14, and a General Assembly in June too. They’ve been keeping an eye on the public sphere too, and are organising a debate on new business models to allow financial sustainability through art following a lawsuit by the Belgian copyright organisation Sabam against ISP for not wanting to cooperate on copyright tax on internet subscriptions.

In Austria, the OKF community is supporting the fight for a freedom of information act…

Together with other civil society initiatives, the Austrian Chapter of OKFN is supporting this movement by organising a series of workshops for all stakeholders on the upcoming freedom of information law, reaching out to civil servants, citizens and politicans. They’ll be providing an opportunity for every stakeholder group to discuss and define their point of view, empowering change-makers across the sphere to broaden their influence, and they’ll be looking to develop the debate around freedom of information in a similar way to which the topic of open data was discussed some years ago.

One little village in Austria deserves a special mention – Engerwitzdorf, a town of only 8000 inhabitants, has released 116 data sets – more than the entire federal government of Austria! They’ve been honoured for their work by being nominated for the Document Freedom Award by the Free Software Foundation Europe – congratulations! OKF Austria will joining in the celebrations through organising Engerwitzdorf’s first OKF MeetUp.

In Switzerland, government data is being made more accessible…

In Switzerland, the OKF Swiss Chapter has been developing a pilot project called Open Government Data at the Confederation – or, OGD@ Federation for short. Through the project, a group of government agencies will be attempting to bundle their data together via an open source platform, and they’ll be presenting this on May 22. We’ll keep you updated with how it goes, and for readers in Switzerland, you can register here.

OKF Spain has been expanding rapidly…

..having reached 149 members on their mailing list and recently having organised a successful Big Data Week in Madrid and Barcelona! It doesn’t sound like they’re sitting on their laurels though, as they have another three day event coming up in Barcelona, Madrid, Sevilla and Valladolid about data journalism which will include a hackathon, a barcamp and several workshops. They have an impressive line up of speakers too, including James Ball from the Guardian, Manuel Aristarán from the Knight Foundation, and OKF Central’s own Michael Bauer, so if you can, swing by!

They also undertook the invaluable task of translating into Spanish Laura’s blog post, “Open Knowledge: much more than Open Data” – which has now become “Conocimiento Abierto: Mucho más que Open Data.” This is a wonderful way of getting our message out to a whole new audience – thanks!

Laura’s post was also a hit with our OKF Greece Chapter, who kindly translated it into Greek. Translations of posts on the okfn.org into any language at all are very much welcome; if you do any translations, please do let us know so we can publicise it too, and we very much appreciate your efforts!

OKF Greece have also been busy organising an #OpenHealth event, and also took part in a Wikimedia workshop together with the Greek Wikipedia community. They recently completed the incredibly useful task of translating the Open Spending handbook into Greek, and you can now find the OKF Greece group on Facebook, too!

In Scotland, Germans and Brits came together…

Last week, the University of Edinburgh hosted the wonderfully multicultural event of German-British Open Data event. Scholarship holders from the Foundation of German Business came together for the weekend of talks, under the title “Open Data — Better Society?” and you can find a great round up of the talks and conclusions on the OKF Scotland blog.

OKF Nepal have been focusing on getting girls into ICT…

OKF Nepal recently teamed up with Wikipedia Nepal to organise a Wikipedia Editathon, which took place on the International Day of Girls in ICT. A truly great initiative, addressing a key issue facing the tech movement. OKFN Nepal’s Prakash Neupane also took to the stage to explain about the Open Knowledge Foundation’s mission, and from the photos it looks like all involved had a wonderful time. We look forward to hearing from the next event!

Congratulations all, for some incredible activities from across the globe!

(and keep an eye out for some exciting upcoming events- OKF Brazil are organising an event on Open Science at the beginning of June, and OKF Australia are organising a Beautiful Data GovHack at the end of May !)

Zara works with School of Data leading our research and learning, and the 2015 Fellowship Scheme. She is based in Berlin, and can be found tweeting @zararah.