The following guest post is by Chris Taggart of OpenCorporates. Here he rounds-up recent developments within the field of Open Company Data. This article is cross-posted from http://blog.opencorporates.com/, published by Chrinon Ltd, a company dedicated to improving and publishing public data under an open licence that allows and encourages reuse, including commercially (direct link to original post).

This month has been a good month for open corporate data, with a number of significant developments, all of them positive, and OpenCorporates is proud to have played a significant part in many of them.

First, and perhaps most exciting for us has been the launch of the Open Company Data Index, supported by the World Bank Institute. This takes an updated version of the reports on access to company data that we did last year, and puts it in an easy-to-use website, so you can compare how well company registers make statutory information available. Critically, this makes visible to all the world just how poor access is to this vital information in many, even highly developed, countries. But not only that, we’ve seamlessly tied the Index to the OpenCorporates backend, to allow the search of OpenCorporates complete database of over 50 million companies, and through that all the features and data on OpenCorporates. 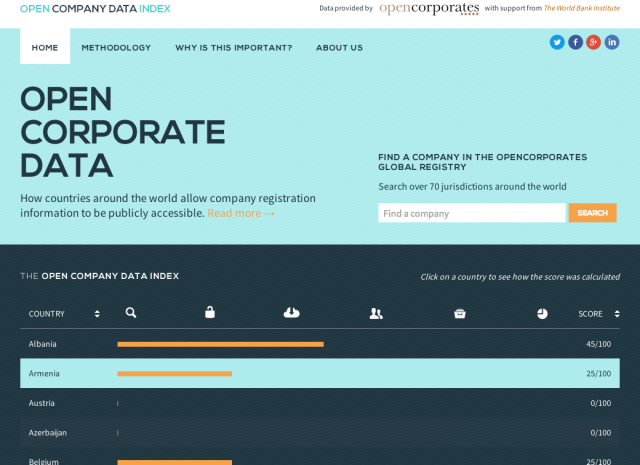 We’re also talking with the World Bank about extending this to those countries which aren’t currently covered (the original report covered the Open Government Partnership countries as of April 2012, the subsequent one covered all the EU countries) and more features and analysis too. 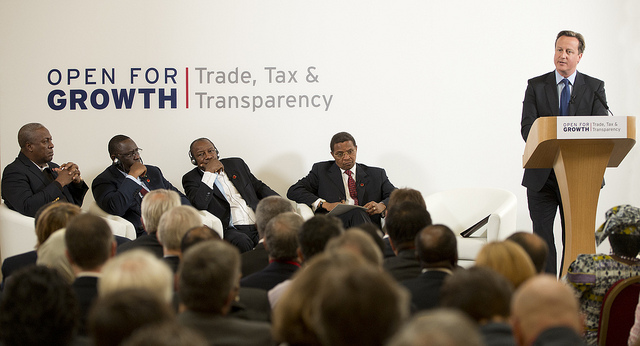 The launch of site has also coincided with an increasing understanding of just how important free, full and open access to company registers is. This was highlighted at the G8 Trade, Tax and Transparency Event (above), held just a week and a half ago at Lancaster House, on the eve of the G8 summit in Lough Erne. It’s easy to get cynical about grand events like this, but I have to say I was impressed with what appeared to be a genuine commitment and efforts by some, particuarly the UK government and the World Bank, to make a positive difference.

No doubt there’s an element of politics about this, but nevertheless this administration has gone considerably further than not just any previous UK government in living memory, but than any other G8 government too, both in open data, and in corporate transparency.

At the event, the World Bank’s Managing Director, Caroline Anstey, highlighted how the new Open Company Data Index has the power ”to incentivize governments to increase transparency of their corporate registries”, and it’s noticeable to us that there is an increasing number of registers starting to return to their core public purpose, and embrace open.

Also at the G8, the Open Data Charter was launched, and this really is a landmark in open data – not for what it says, which is what many in the open data community have been saying for some time, but for who is saying it. Here you have most of the world’s most powerful countries (China is missing, of course) committing to “open by default”, and setting out high level principles and practical actions that are required to achieve that. Some, like the UK and the US, have been saying this for some time (although their actions haven’t always backed up the rhetoric). For others, for example Japan, Russia, Canada and France, it moves them considerably further along the road than they were.

Perhaps most significant of all was Germany, which had up to this point shown no inclination of even considering open data to be a discussion worth having, still less taking active steps to promote it. For it to even commit to open data in principle, still less “open data by default…”, is hugely significant, and not just for the German open data community, but also for Europe.

The Charter also potentially helps open up company registers, as company/business registers is one of the core high value datasets that are listed in the annex, which the G8 member countries agreed: “In accordance with the principles of ‘open by default’ and ‘quality and quantity’ we will work towards the progressive publication of these data.”

Finally, on the G8, although there was little progress on who owns companies – critical not just for money laundering, fraud and organised crime – there were some tiny movements, notably this line from the communique on Common principles on misuse of companies and legal arrangements:

The misuse of financial instruments and of certain shareholding structures which may obstruct transparency, such as bearer shares and nominee shareholders and directors, should be prevented

Though little reported, this clause, which will require action by the UK among others, could see some significant improvements in corporate transparency, particularly of corporate networks, of which more in a future blog post.

There has also been progress with the extractive industries, with both the UK and France committing the Extractive Industry Transparency Initiative (subsequently Italy also committed to joining). And while the EITI is still lagging in terms of open data and the underlying data about companies involved in the extractives industry, there are tiny moves towards it – machine-readable is now ‘encouraged’ for reports, though company structures aren’t clearly addressed.

Finally, last week OpenCorporates sailed through the 55 million company mark, and with several new company registers about to be imported in the next two months (including we hope some who will be publishing their information as open data for the first time), we’re looking at 60 million as our next minor milestone.

You can read the original post and more Open Corporates News at their blog.