Open Data Day was celebrated for the first time at Technarium hackerspace (Vilnius) this year, with not one but two amazing events! 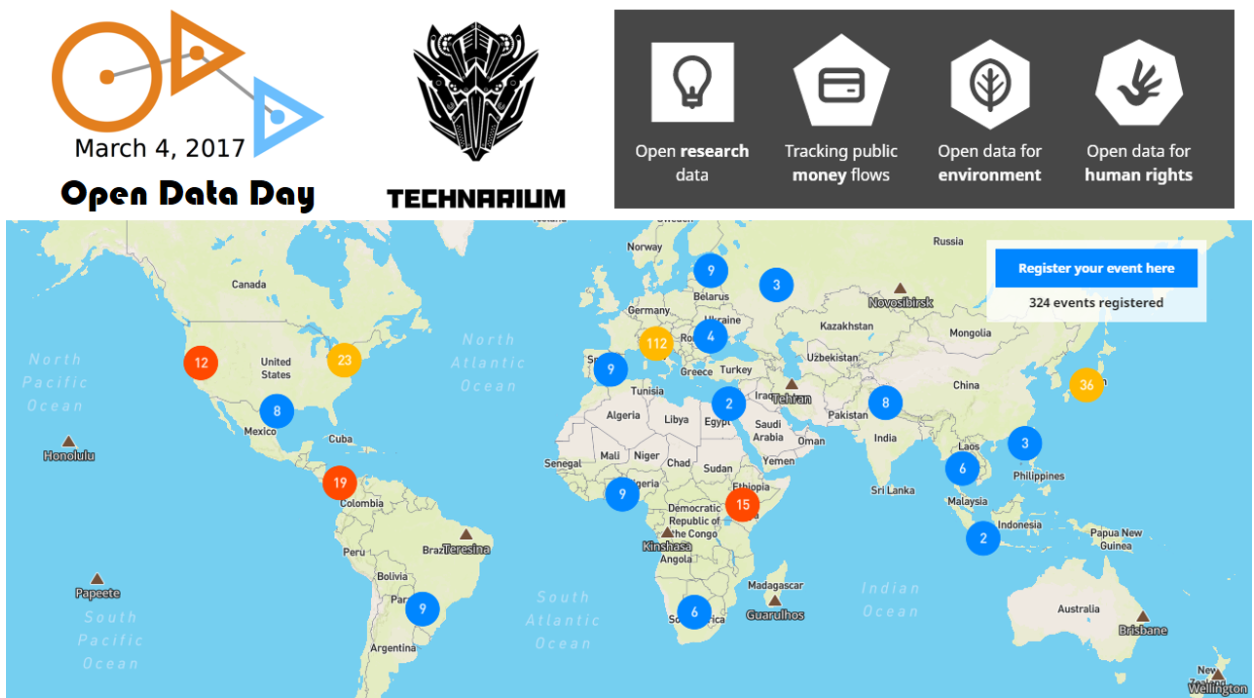 The morning part – Open Data Hackathon – kicked off with the Vilnius City Council, who brought some pizzas & told us all about the open data work they do. Vilnius has recently become a hotspot of open data in Lithuania, as the council elected in 2015 has made it one of its top priorities. 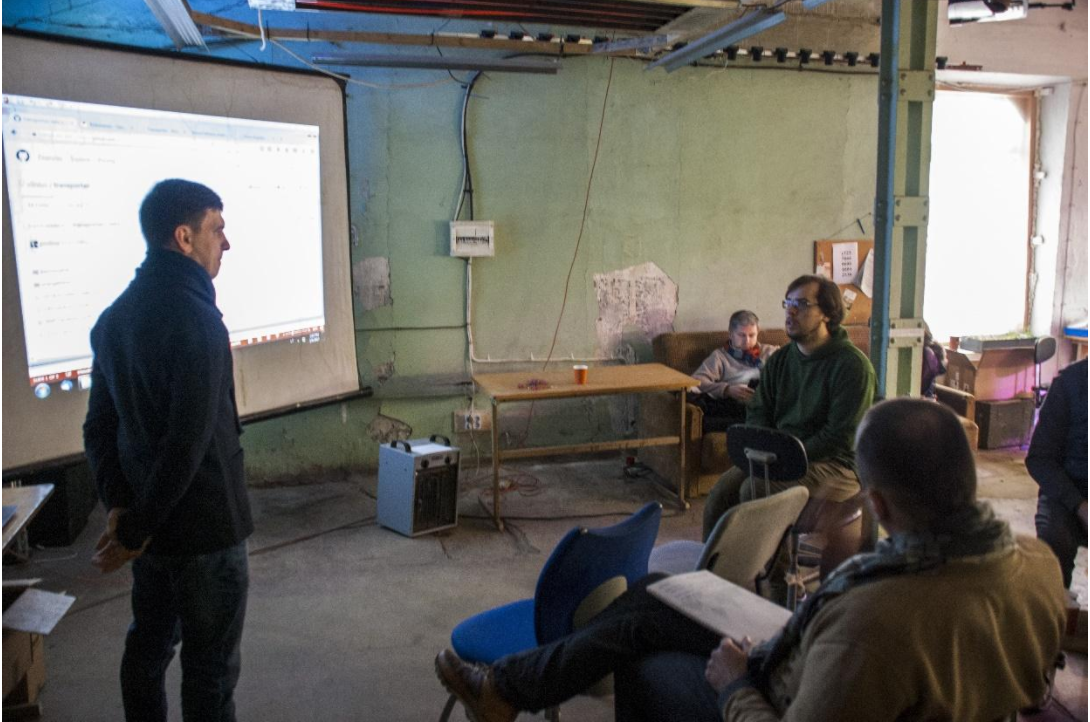 Council representatives demonstrated the Open Vilnius website, open data repository on GitHub, as well as the recently created opendata.lt portal, which was “fired up” in one weekend by one of the advisors of the mayor – Povilas Poderskis, an open data & IT expert. The portal has an exciting background story, as it was inspired by a 2.8 mln euros worth project for a national open repository, but was created in a few hours by Povilas entirely voluntarily, by purchasing a server and installing CKAN open source software. The portal now serves as an “unofficial national open data repository”, but is used by an increasing number of institutions under their own initiative or by encouragement from the Vilnius City Council. 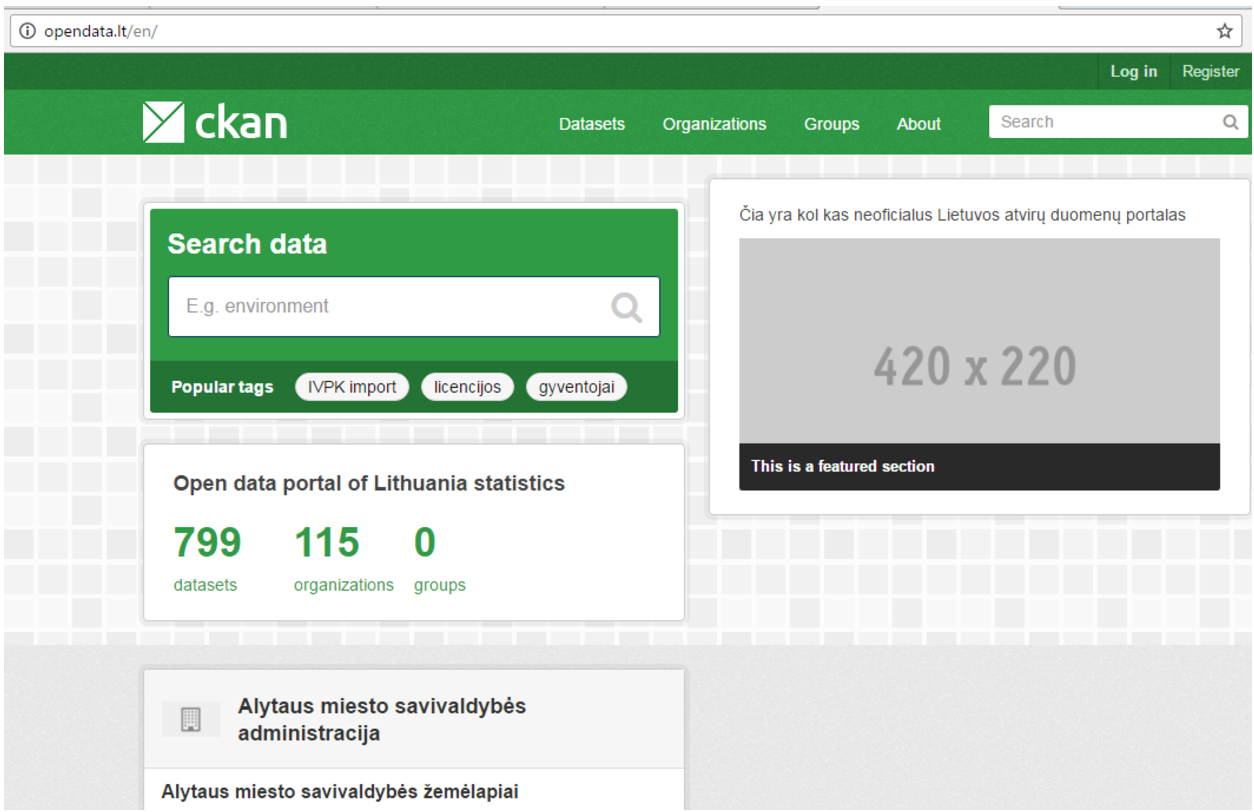 According to Povilas Poderskis, the main goal of encouraging institutions to open up their data is transparency:

Open data ensures that mistakes, misuse and corruption are revealed sooner rather than later, persons responsible for abuse of power lose their positions, thus bringing positive change that affects everyone. – Povilas Poderskis

The city council representatives shared some success stories of open data use at a national level, including Lithuanian Road Administration, National Health Insurance Fund and others, and Vilnius-specific issues, such as opening up the kindergarten registry so citizens can better plan their applications, and Tvarkau Vilnių – an app that allows you to submit problems you see around the city, which are then displayed on a public map and passed to appropriate institutions.

Then a group of hackers took the challenge of hacking the open city data for the rest of the afternoon and came up with a couple of creative visualizations & tools, including an application that connects streets names with the areas of the city they’re in (very handy!), analysis of registered cats and dogs (suspiciously, about twice as many dogs are registered than cats, suggesting cat owners might be skipping this responsibility!) and other tools which are still in progress and will be reported on via Technarium blog! 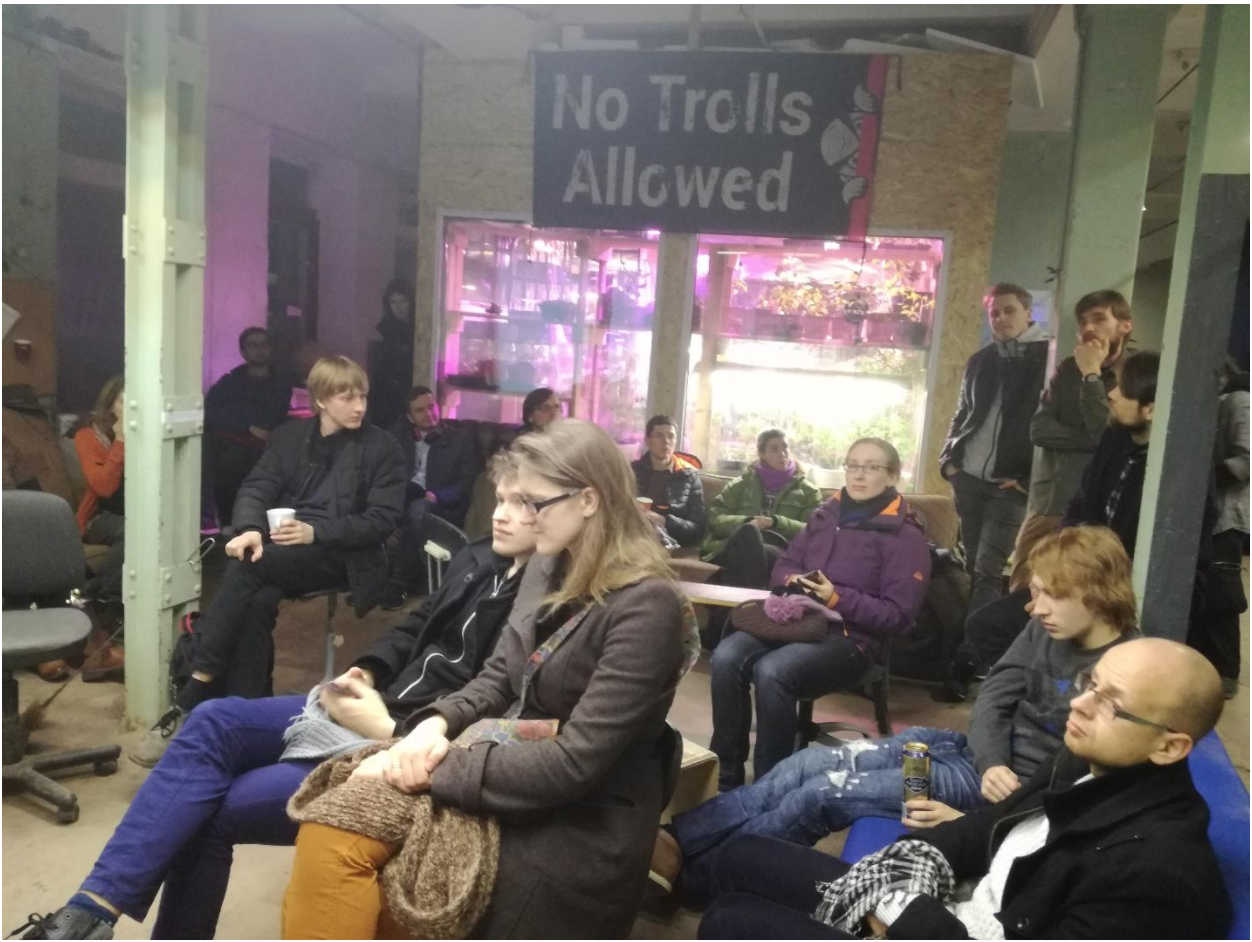 Participants at the event

In the evening we held a separate event – Café Scientifique: Opening up YOUR research data – aimed at researchers of various disciplines. We had two fantastic speakers: Michael Crusoe, one of the founders of the Common Workflow Language (CWL) project, and Vida Mildažienė, a biochemist at Vytautas Magnus University.

Michael gave an engaging talk about the general purpose of communicating the scientific process clearly, and how having a shared specification make it easier for scientists to share their workflows, especially in data-intensive fields, such as bioinformatics, and highlighted the importance of doing so to enable greater reproducibility & usability of research data. 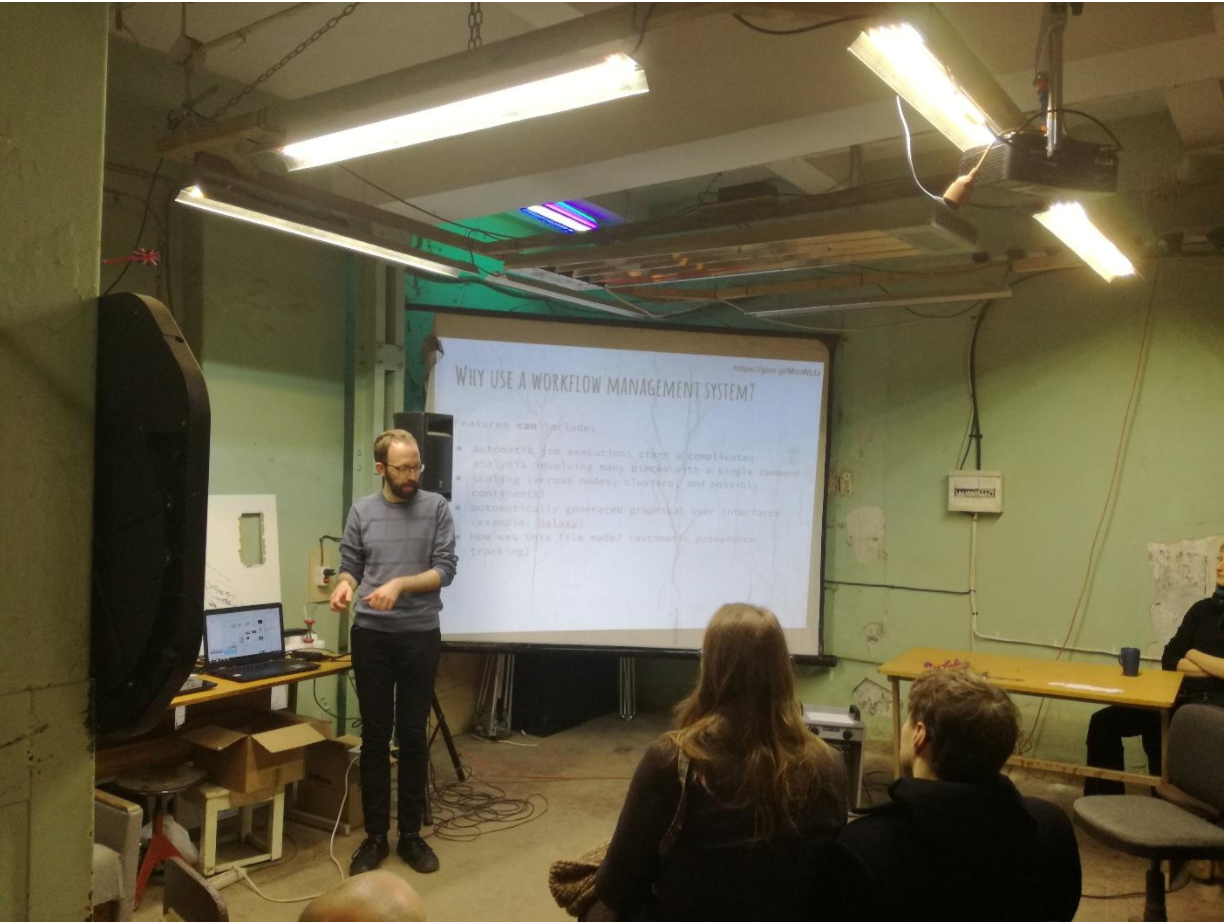 Quite a few participants insisted on a demo of CWL after the talk, and that is what they got! :) 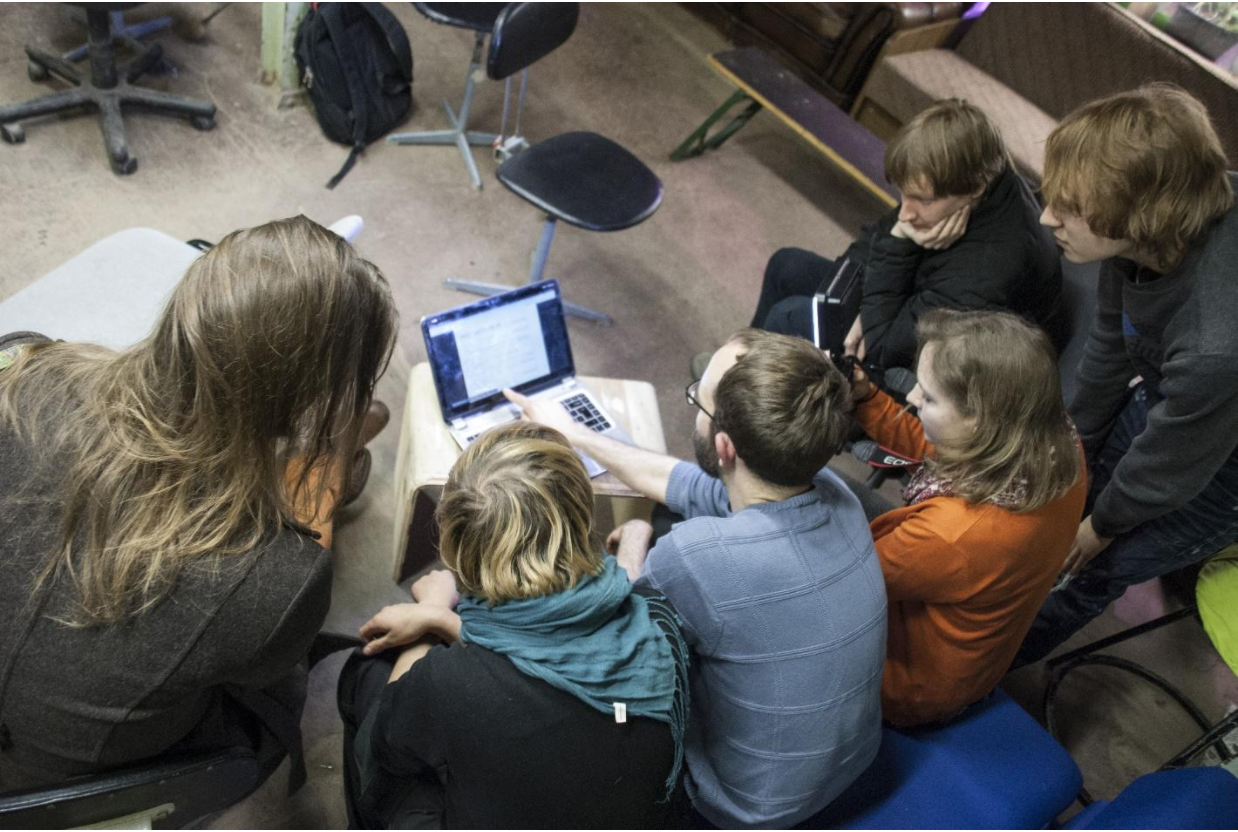 Next, Vida spoke about the state of open science in Lithuania for education & for society. She took us through the different science communication efforts and events that are ongoing or have been organised in the past in Lithuania and highlighted some cultural problems we are still facing with respect to connecting science and the society. Vida also shared some local citizen science projects that are brewing, and highlighted hackerspaces as places for open science to organically occur! 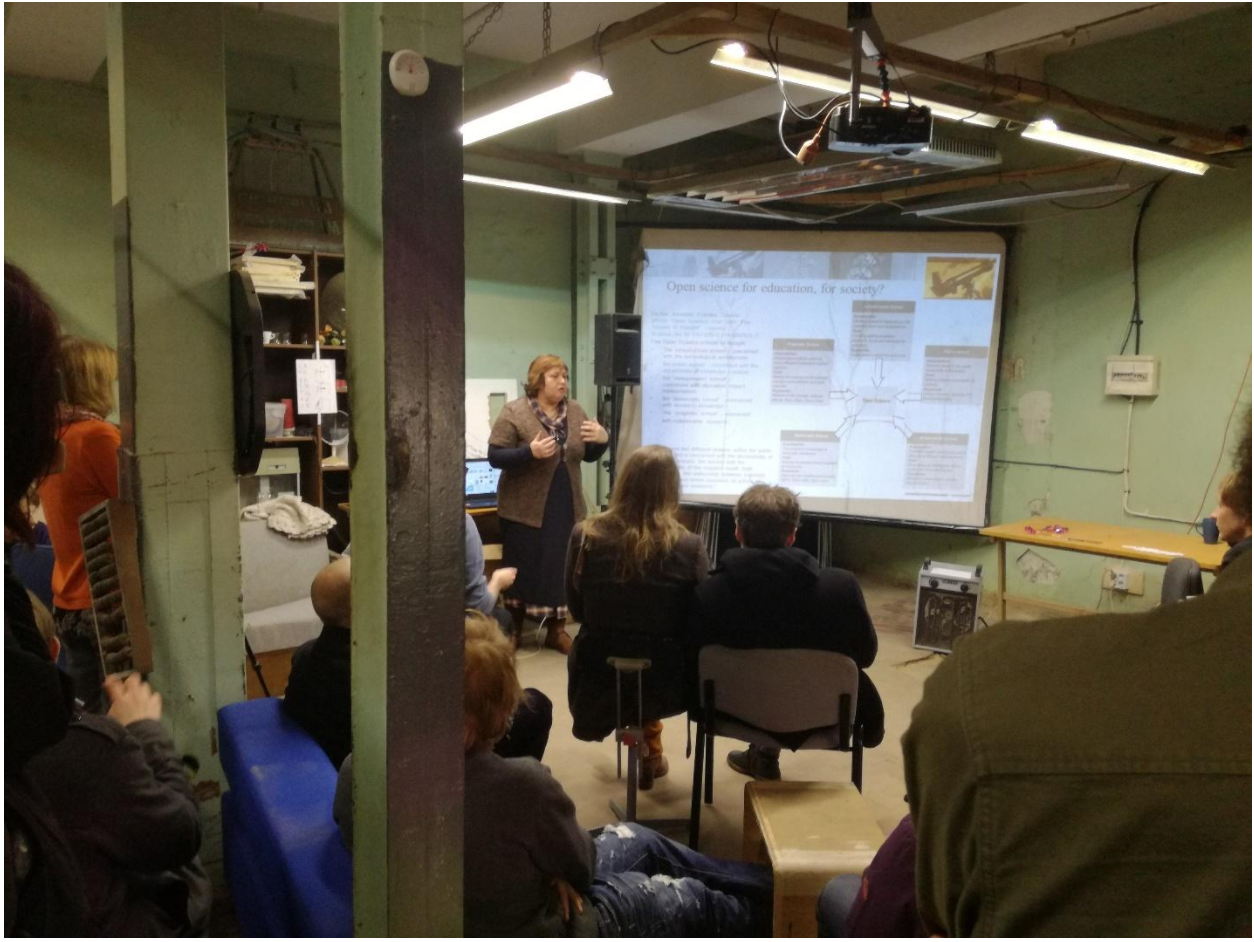 Vida Mildažienė, a biochemist at Vytautas Magnus University leading a discussion on open science in Lithuania.

After the talks we engaged in an important discussion regarding open science in Lithuania, and tried to answer these questions: 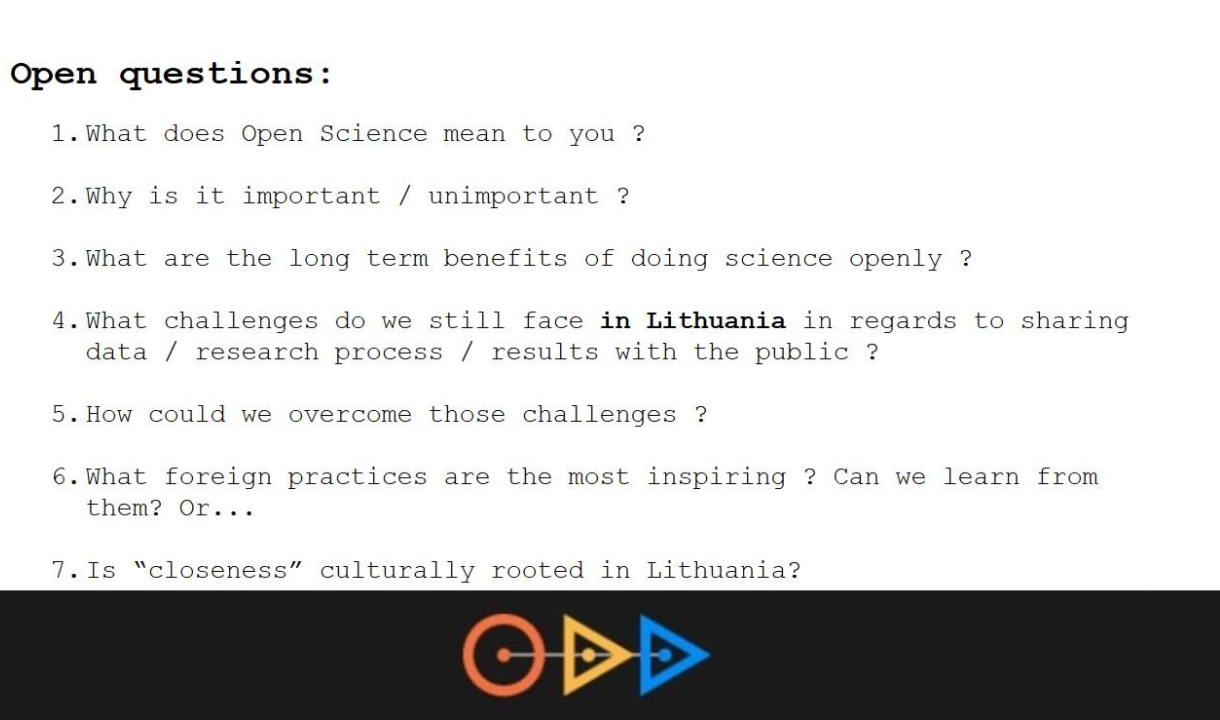 It was especially helpful to have Michael in the audience – someone who knows open science as it applies to the international scene, but also new to Lithuania, and can, therefore, ask insightful questions!

We discussed the general difficulty of getting researchers to share their data – the time it takes, the fear of sharing their ideas and results prematurely in case they get “scooped”, which are problems familiar across the world. We also raised the question of whether there is enough information about open science and its methods in Lithuania, as, e.g. people seem oblivious about pre-publishing or other alternative methods of sharing in the scientific process, or even national open research data repositories. On the other hand, since the concept of open science is reaching us a bit later, we have a chance to do it right the first time, by learning from mistakes already made!

The event was filmed by a grassroots science popularisation show called Mokslo Sriuba (“Science Soup”), and will be reported on Mokslo Sriubos TV on Youtube soon!