Fiscal data is a complex topic. It comes in all different kind of formats and languages, its’ availability cannot be taken for granted and complexity around fiscal data needs special skills and knowledge to unlock and fully understand it. The Global Open Data Index (GODI) assesses three fiscal areas of national government: budgets, spending, and procurement.

Repeatedly our team receives questions why some countries rank low in budgets, public procurement or spending, even though fiscal data is openly communicated. The quick answer: often we find information that is related to this data but does not exactly describe it in accordance with the described GODI data requirements. It appears to us that a clarification is needed between different fiscal data. This blogpost is dedicated to shed light on some of these questions.

As part of our public dialogue phase, we also want to address our experts in the community. How should we continue to measure the status of these three key datasets in the future? Your input counts! Should we set the bar lower for GODI and avoid measuring transactional spending data at all? Is our assessment of transactional spending useful for you? You can leave us your feedback or join the discussion on this topic in our forum.

The different types of fiscal data

Budgeting is the process where a government body sets its priorities as to how it intends to spend an amount of money over a specific time period (usually annually or semi-annually). Throughout the budgeting cycle  (the process of defining the budget), an initial budget can undergo revisions to result in a revised budget.

Spending is the process of giving away money. This mean, the money might be given as a subsidy, a contract, refundable tax credit, pension or salary.

Procurement is the process of selecting services from a supplier who fits best the need. That might involve selecting vendors, establishing payment terms, some strategic tender or other vetting mechanism meant to prevent corruption.

Not only are the processes linked to each other, the data describing these processes can be linked too (e.g. in cases where identifiers exist linking spending to government budgets and public contracts). For laypersons, it might be difficult to tell the difference when they are confronted with a spending or procurement dataset: Is the money I see in a dataset spending, or part of contracting? The following paragraphs explain the differences.

As mentioned above, budgeting is called the process where a government body decides how to spend money over a certain time period. The amount is broken into smaller amounts (budget items) which can be classified as follows:

After the budget period ends, we know how much money was actually spent on each item – in theory. The Global Open Data Index assesses budget information at the highest administrative level (e.g. national government, federal government), which is broken down in one of these classifications. Here is an example of some fully open budget data of Argentina’s national government. 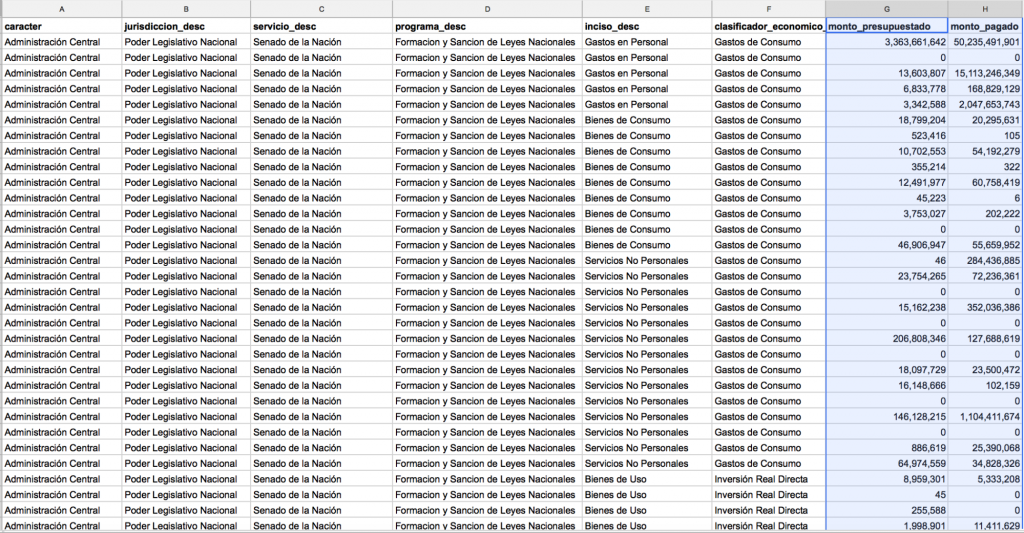 The image shows the government entity, and expenditures split into economic classification (how the money is used). At the far right, we can see a column describing the total amount of money effectively spent on a planned budget expenditure. It basically compares allocated and paid money. This column must not be mixed with spending information on a transactional level (which displays each single transaction from a government unit to a recipient).

The Spending Data Handbook describes spending as “data relating to the specific expenditure of funds from the government”. Money might be given as a subsidy, as payment for a provided service, a salary (although salaries will seldom be published on a transactional level), a pension fund payment, a contract or a loan, to name just a few.
GODI focusses on transactions of service payments (often resulting from a prior procurement process). Monetary transactions are our baseline for spending data. GODI assesses the following information:

GODI exclusively looks for single payment transfers. The reason why we are looking at this type of data is that spending patterns can be detected, and fraud or corruption uncovered. Some of the questions one might be able to address include: Who received what amount of money? Could government get its services from a cheaper service provider? Is government contracting to a cluster of related companies (supporting cartels)?

GODI’s definition of spending data, even though ambitious in scope, does not consider the entire spectrum of transactional spending data. Being produced by many agencies, spending data is scattered  across different places online. We usually pick samples of specific spending data such as government payments to external suppliers (e.g. the single payments through a procurement process). Other types of payment, such as grants, loans or subsidies are then left aside.

Our assessment is also ‘generous’ because we accept spending data that is only published above a certain threshold. The British Cabinet Office, a forerunner in disclosing spending data, only publishes data above £25,000. GODI accepts this as valid, even though we are aware that spending data below this amount remains opaque. There are also many more ways to expand GODI’s definition of spending data. For instance, we could ask if each transaction can be linked to a budget item or procurement contract so that we understand the spending context better.

Above is an example image of Great Britain’s Cabinet Office spending. You can see the date and the amount paid by government entity. Using the supplier name, we can track how much money was paid to the supplier. However, in this data no contract ID or contract name is provided that could allow to fully understand as part of what contracts these payments have been made.

When purchasing goods and services from an external source, government units require a certain process for choosing the supplier who fits best the need. This process is called procurement and includes planning, tendering, awarding, contracting and implementation. Goals are to enable a fair competition among service providers and to prevent corruption.

Many data traces enable to shed light on each procurement stage. For example one might want to understand from which budget a service is gonna be paid, or what amount of money has been awarded (with some negotiation possible) or finally contracted to a supplier. This blogpost by the Open Contracting Partnership illustrates how each of the procurement stages can be understood through different data.

GODI focuses on two essential stages, that are considered to be a good proxy to understand procurement. These however do not display all information.

Any payment resulting out of government contracts with external suppliers (sometimes only one, sometimes more) has to  be captured in government spending. For example, there might a construction contractor that is being paid by milestone, or an office supplies dealer which is chosen as a supplier. Then each spending transaction is for a specific item purchased through a procurement process.

Below you can see a procurement database of Thailand. It displays procurement phases, but does not display individual transactions following from these. This particular database does not represent actual spending data (monetary transactions), but preceding stages of the contracting process. Despite this the platform is misleadingly called “Thailand Government Spending”.

Another example is a procurement database indicating how much money has been spent on a contract:

The road ahead – how to measure spending data in the future

Overall, there is slow but steady progress around the openness of fiscal data. Increasingly, budget and procurement data is provided in machine-readable formats or openly licensed, sometimes presented on interactive government portals or as raw data (more detail see for example in the most recent blogpost of the Open Contracting Partnership around open procurement data).

Yet, there is a long way to go for transactional spending data. Governments do first laudable steps by creating budget or procurement websites which demonstrate how much money will or has been spent in total. These may be confusingly named ‘spending’ portals because in fact they are linked to other government processes such as budgeting (e.g. how much money should be spent) or procurement (how much money has been decided to pay for an external service). The actual spending in form of single monetary transactions is missing. And to date there is no coherent standard or specification that would facilitate to document transactional spending.

We want to address our experts in the community. How should we continue to measure the status of these three key datasets in the future? Your input counts!  You can leave us your feedback and discuss this topic in our forum. 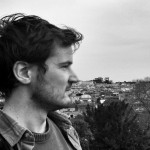