This blog post is part of our summer series featuring updates from local groups across the Open Knowledge Network and was submitted by Open Data Hong Kong (ODHK). It was first published on Open Data Hong Kong (ODHK)’s website and has been written by Robert Porsch, a PhD student studying statistical genetics at the University of Hong Kong, and has a general interest in all kinds of data analysis.

Open Data Hong Kong participated in the 2017 International Open Data Day hackathon organised at the City University of Hong Kong. Some of the ODHK team pitched a project looking at refugee crime data (see the hackpad and our slides), which is being used as a political football in Hong Kong at the moment, despite there being a big data vacuum in this area. With no relevant data available from data.gov.hk, we’ve been forced to try and gather disparate data from FOI requests and other sources to assist local NGO’s such as Justice Centre Hong Kong in their policy work. This project attempted to fill some of the gaps and visualise this data.

Arrests of Refugees in Hong Kong. Is there the “surge” the media is portraying?

Like many societies in recent times, Hong Kong is having a heated discussion about immigration, with regards to refugees especially. A common belief here is that refugees commit more crime than the general population and that most criminals are of South East Asian ethnicity. Further, some have suggested that the increase in refugees has led to a general increase in crime within Hong Kong. This has led to strong comments by some politicians (e.g. Dominic Lee in Sham Shui Po calling for internment camps). However, there is surprisingly little public data available to base these on.

Therefore, Open Data Hong Kong has attempted to acquire some data on the topic, especially Scott Edmunds who had to spend a lot of time collecting the data by contacting individual police districts and police regions in Hong Kong through Code on Access to Information requests (the Hong Kong equivalent to FOI). So here I will take a look at the data and see if I can find some answers.

What does the data say?

It is important to note something of significance about refugees in Hong Kong; I was unable to find accurate figures on the total numbers of Asylum Seekers in Hong Kong, although according to the immigration department, there were around 9,618 people registered and claiming asylum in Hong Kong in 2014, 10,922 in 2015, and 9,981 in 2016. Official numbers will not count the unregistered and do not provide demographic breakdowns. Hong Kong never joined the UN Convention on the Status of Refugees, and Asylum Seekers can only apply under the UN Convention Against Torture, or at least cite it as a reason for protection.

Furthermore, the recognition rate is very low. About 0.16% of applicants are accepted (the global average is 27%). The application process is quite slow as well. This results in many applicants staying in the city for years without the possibility of deportation since asylum seeker whose application have been rejected cannot be deported due to in many cases a lack of extradition agreement with the corresponding home countries. During their stay,  applicants as well as those who are rejected, are not allowed to work, but the government provides some minimal rental, food and medical subsidy (For example, Hong Kong allocated HK$450 Million in the budget of 2013/2014). Some have suggested that these subsidies are too low to maintain a living in Hong Kong and provide incentives to be involved with criminal activities. The majority of claimants are from South and Southeast Asia.

To assess crimes committed by refugees in Hong Kong, I took a look at the data provided by Open Data Hong Kong, as well as publicly available census data and crime statistics. Unfortunately, not all police districts in Hong Kong were able to provide the criminal statistics of refugees. In fact, only West Kowloon region was able to provide a complete picture across their district. Furthermore, these numbers are arrest statistics and not convictions (ODHK has collected data showing roughly 50% of arrests result in convictions). So any conclusions should be viewed with care.

Has there been an increase in arrests with the presence of refugees?

This question is relatively easy to answer and I have plotted the overall number of arrests for each region by year below. 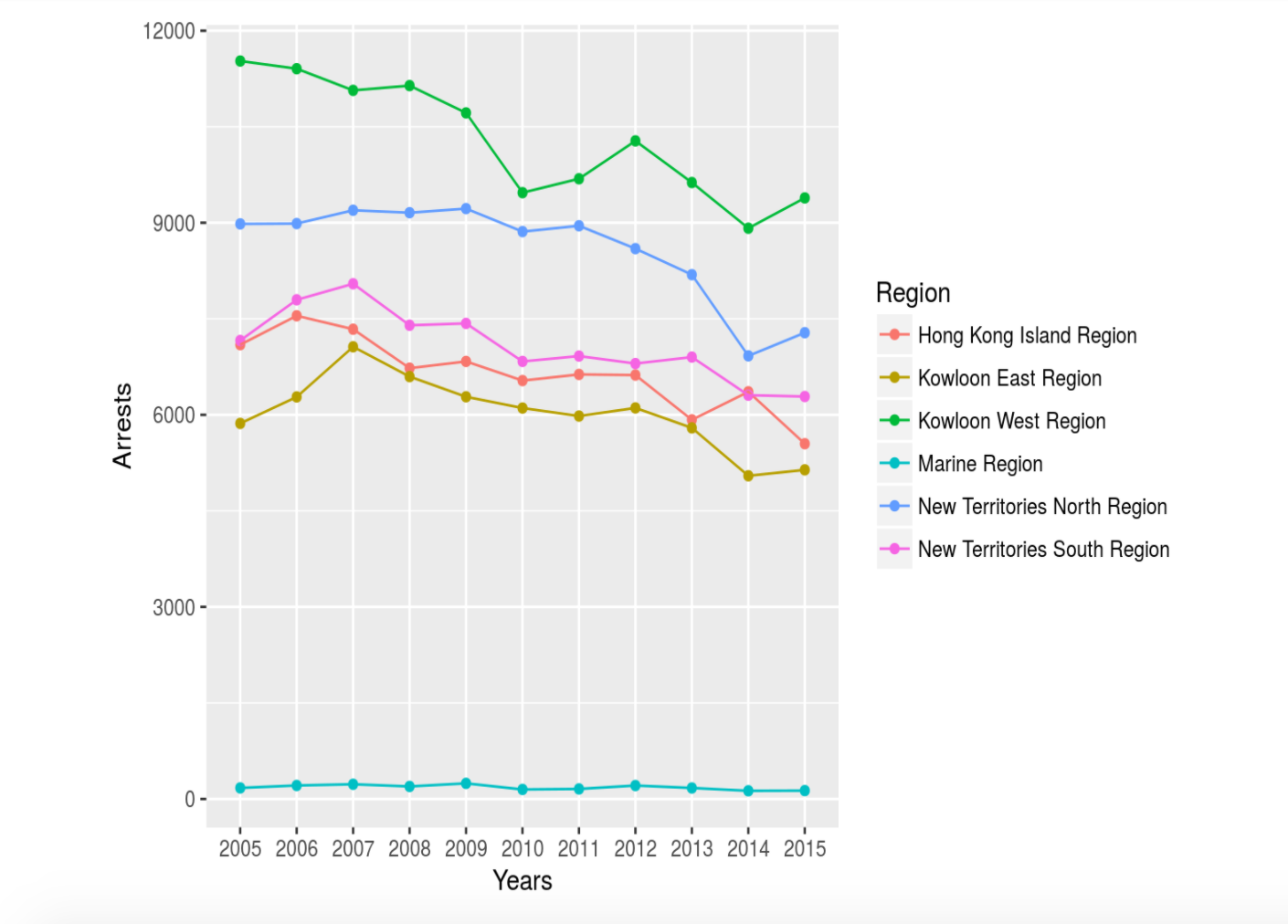 As you can see there seems to be no overall dramatic increase in arrests for all of the regions. However, there is a slight increase in crime Kowloon East and West, but in general the trend points downwards. This would suggest crime in Hong Kong is not increasing. 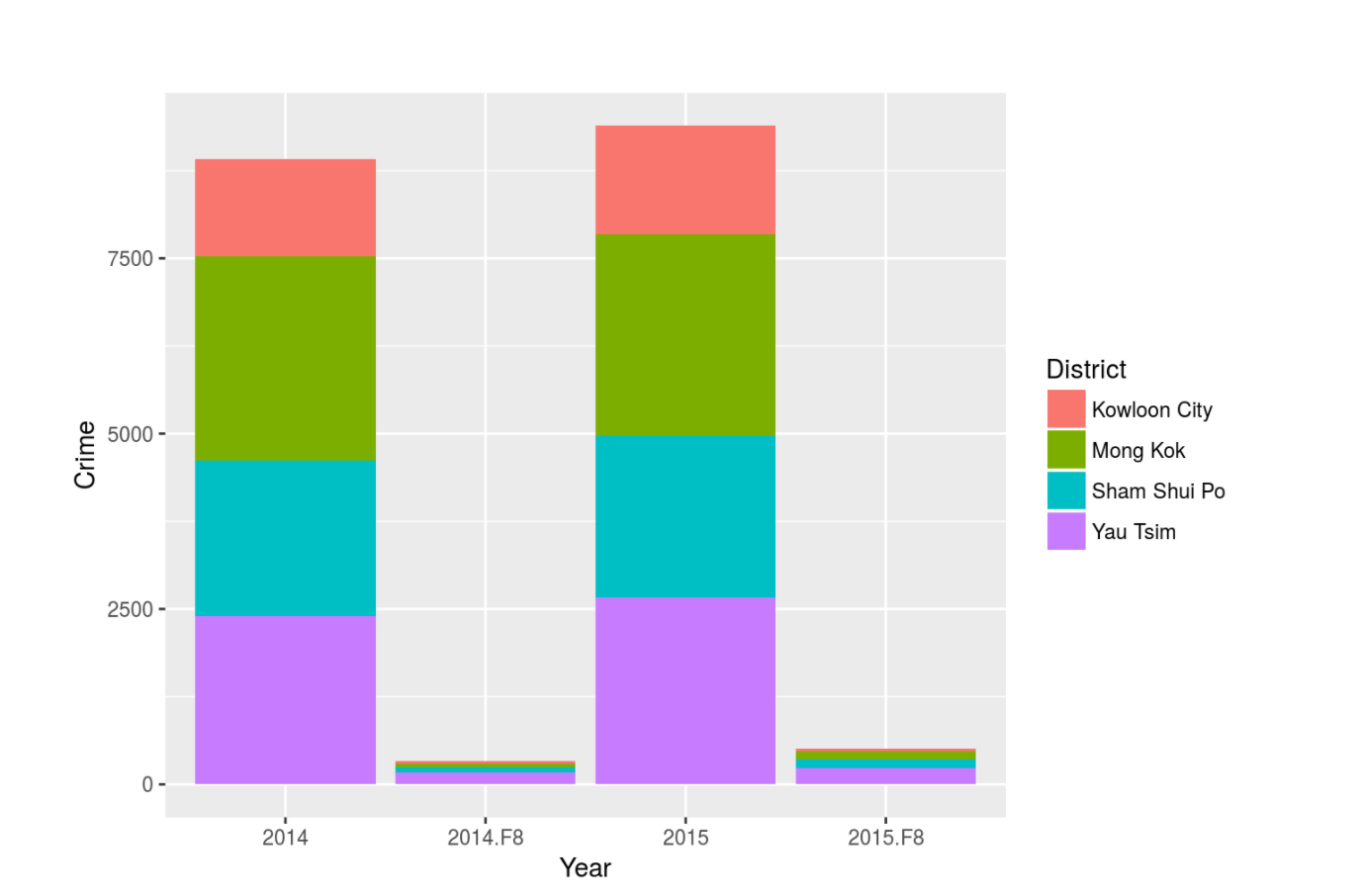 Let me explain the plotted graph above in a bit more detail. I used data available for 2014 and 2015. Also, Hong Kong does not use the word ‘refugee’ because the territory has not signed the UN Refugee Convention, so the exact legal classifications are a bit vague. Nevertheless, some police stations have called refugees “Form 8” (F8) holders so I will use this phrase here as well. Thus, the graph above shows the number of F8 holders arrested between 2014 and 2015 in the Kowloon West region.

So comparably, those arrest rates look quite small. Indeed in 2014 and 2015, the proportion of arrests of F8 holders was 4% and 5% respectively. So these numbers seem rather stable and would suggest no major change between 2014 and 2015, despite a slight increase in the number of refugees.

Do refugees commit more crime than others?

This question turned out to be much more difficult to answer than I thought. One problem is that I do not know how many refugees live in Kowloon West, further police districts are not the same as council districts. This makes it difficult to get a population estimate since the census data from 2011 only looked at council districts. Thus I am unable to answer this question with the current data. Only the availability of the exact arrest numbers of refugees for the whole of Hong Kong or the exact numbers of refugees living in Kowloon would help to answer this question.

There is no evidence of an increase in crime in Hong Kong (at least from the available data), also there seems to be a slight increase from 2014 to 2015 (looks more like random noise to me). Arrests of F8 holders was relatively stable between 2014 and 2015. Intuitively I think the proportions of arrests of F8 holders are higher than one would expect given a small population of around 10,000 but one needs to keep in mind that arrests are not convictions. In general, the data is not really sufficient to make a conclusive statement. Except that HK is incredibly safe compared to other major cities (0.4 murders per 100,000 people in 2016; one of the lowest in the world).

For more information about the work of Open Data Hong Kong, email the team: info-at-OpenDataHK.com; leave a comment on their Google+ page or join their regular meetups or events and engage with the community.