This is the fourth in a series of blogs on how we are using the Agile methodology at Open Knowledge International. Originating from software development, the Agile manifesto describes a set of principles that prioritise agility in work processes: for example through continuous development, self-organised teams with frequent interactions and quick responses to change (http://agilemanifesto.org). In this blogging series we explore the different ways Agile can be used to work better in teams and to create more efficiency in how to deliver projects. Previous posts dealt with user stories, methodologies and the use of scrum and sprints in open data: this time we go into Kanban.

Scrum is an example of a relatively big methodology with high ceremony (in the agile universe). There are daily standups, sprint backlogs and commitments, product owner, scrum masters etc. Always going for Scrum may make us look like we’re organised, but we might be organised in the wrong way.

Less can lead to more

The opposite of Scrum in the agile world is perhaps Kanban. It’s designed to not interfere in any way with how the team already works. It may even be an addition to Scrum. It’s a form of what has been called Just-In-Time delivery/development. 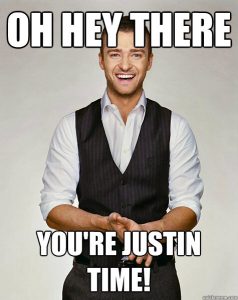 Kanban works on a different level. In Japanese Kan stands for card and ban means for signal. Kanban could therefore be translated as Card signals and that comes pretty close because Kanban is about using cards or some equivalent of cards to signal progress. It’s a card dashboard showing what’s being done where. There is no sprint that denotes work units, it’s just continuous work and planning when needed, or just in time.

This is not a be all, end all list. This is an example of what columns might be included. Kanban doesn’t tell us what columns we should use. Kanban is designed to be an addition on top of our current processes.

The cells of the spreadsheet will then include requirements, for example user stories, that are in each stage for each feature or team. If we remember the requirements iceberg, this this is the 1-2 day tasks that we perform.

As work progresses on each requirement item, it moves between the different columns. This creates the Kanban dashboard, visualising progress of the project. Kanban encourages autonomy and leadership on all levels. Every team member can come in each day, have a look at what’s needed and just do some work and then once done, move it between columns. That’s part of the just-in-time attitude. We don’t need to plan everything in beforehand, things will be done just in time.

That means for managers, who normally push schedules for work to team members, they now have to sit back and give the team autonomy over the process. Likewise, team members who are used to being told what to do, now have to take matters into their own hands and pull the work that needs to be done.

What about prioritisation you may ask? What about team members just picking low-hanging fruit or easy tasks and leave all the boring tasks until last even if they are the highest priority?

Kanban puts limits on each column. How many is up to the team, but it is not allowed to have more than a prefixed amount of requirements in each column at any given moment. So there might never be more than 8 incoming work items, 2 items being drafted, 3 being implemented etc. The only exception to this can be the last column, delivered which collects everything that has been done, but is usually not a part of the Kanban dashboard or if it is, then it’s regularly purged.

So if the team wants to implement a drafted feature but the amount of items in the implementation column has already reached the maximum they need to sort that out first, before they can take on more implementation work. The project manager or client representative will typically manage the incoming work column but that one is also limited by the maximum amount and progress.

Common sense should of course be applied to these limitations. If the team is heterogeneous, i.e. each row in the “pretend spreadsheet” is a different area instead of a different feature, the limitations apply to each of the cells in the column (e.g. we can’t have the content team limit the software developers just because they have more to do).

Kanban is really simple, it’s all about visualising the work flow and not overwhelming the team. It’s built around four principles:

It should be really simple to pick up Kanban and add it on top of whatever you’re doing today. Kanban works really well for whiteboards but the biggest obstacle for a remote organisation is finding a good digital tool for the workflow visualisation; Trello might work if if you don’t care too much about the rows. Google spreadsheet might work if you don’t care about the extra effort of moving things around.

If you find a good way to manage a Kanban board, please share it through the comments below or on our forum!

Tryggvi Björgvinsson is the Unit Head of IT and Dissemination for Statistics Iceland. He previously worked for Open Knowledge Foundation, and is one of the founders of the Icelandic Digital Freedom Society (FSFI).