On 30 January 2018 the International Budget Partnership (IBP) has published the Open Budget Survey 2017 with an interactive Data Explorer developed for the IBP by Open Knowledge International and updated for the 2017 survey.

Launched in 2006, the Open Budget Survey (OBS) is the world’s only independent, comparative assessment of the three pillars of public budget accountability: transparency, oversight and public participation. The sixth round of this biennial assessment in 2017 evaluated 115 countries across six continents. The coverage of the survey was expanded to include 13 countries for the first time, including some advanced economies such as Japan and Australia, emerging economies such as Côte d’Ivoire and Paraguay, and fragile states such as Somalia and South Sudan. 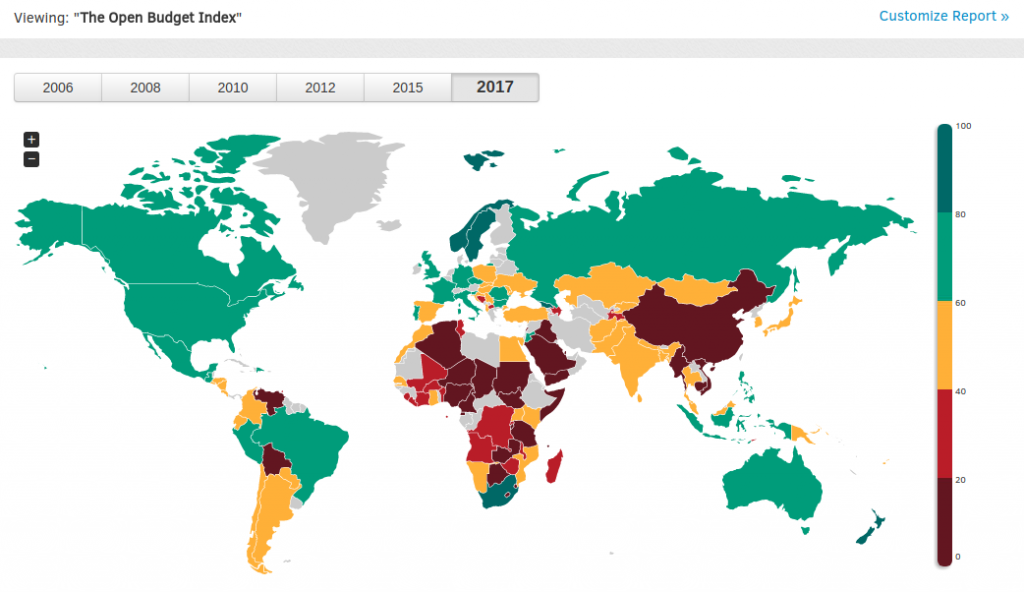 The results of the survey show that many governments around the world are making less information available about how they raise and spend public money. After 10 years of steady progress by countries, the 2017 survey shows a modest decline in average global budget transparency scores, from 45 in 2015 to 43 in 2017 for the 102 countries that were surveyed in both rounds (scores are out of a possible 100). This is in stark contrast to the average increase of roughly two points documented among comparable countries in each round of the survey between 2008 and 2015. The reversal of transparency gains is particularly discouraging given roughly three-quarters of the countries assessed do not publish sufficient budget information (a score of 61 or higher), seriously undermining the ability of citizens worldwide to hold their government accountable for using public funds efficiently and effectively.

The Data Explorer, built by Open Knowledge International in 2006 and updated for this weeks release, allows users to visualise the data from current and previous surveys in a number of different ways. A map view shows the changing geography of openness over the six surveys, while a timeline  shows the movements of individual countries over the same period. A more detailed page of rankings shows graphically how each country’s score is calculated. A datasheet for each country presents the full data, letting the user see how it has performed on each test in every survey. Users can also generate custom reports, or download the entire dataset. Another useful feature allows users to see how a country’s score might change for the next survey. You can click to decide what changes to make to your chosen country’s budget systems, and the change that would result to its openness score is shown.

The Open Budget Survey 2017 could not come at a more critical juncture as we look to reinvigorate democratic practice, re-engage the disaffected, and restore public trust in public institutions. Around the world, there has been a decline in public trust in government, in part due to instances of corruption but also because of dramatic increases in inequality. In a number of countries, leaders who have disguised their intolerant and reactionary agendas with populist rhetoric have been swept into power by those who’ve been left behind. These political shifts have driven out many government champions of transparency and accountability — especially those from countries in the global south. More broadly across countries, there has been shrinking of civic space, rollbacks of media freedoms, and a crackdown on those who seek to hold government to account, including individual activists, civil society organizations, and journalists.

Because open and accountable public budgeting is at the center of democratic practice and equity, it is the first place we should look for ways to strengthen the interaction between governments and citizens. Ensuring that the budgeting process is characterized by high levels of transparency, appropriate checks and balances, and opportunities for public participation is key to stemming the decline in confidence in government and representative democracy. 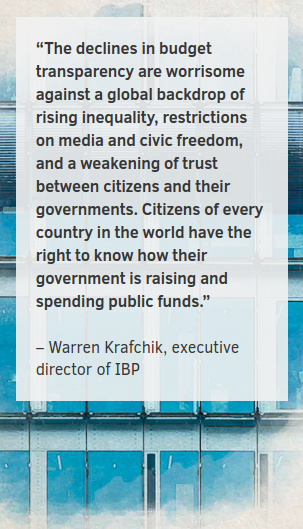 In the face of the spread of profound threats to active, informed public participation, and thus the ability of citizens to ensure their governments will pursue policies that improve their lives, the Open Budget Survey 2017 provides essential data on the state of budget transparency and accountability around the world. The survey answers two fundamental questions to assess whether national governments produce and dissemination key budget documents to the public in a timely, comprehensive and accessible manner:

In addition, the 2017 survey includes a newly enhanced evaluation of whether governments are providing formal opportunities for citizens and their organizations to participate in budget decisions and oversight, as well as emerging models for public engagement from a number of country innovators. It also examines the role and effectiveness of legislatures and supreme audit institutions in the budget process.

Open Knowledge International helps governments to meet the goal of budget transparency by providing OpenSpending, a project to unlock public fiscal data. OpenSpending offers a platform and a fiscal data standard that makes publishing and visualising budget data easy and efficient. In collaboration with the Global Initiative for Fiscal Transparency (GIFT), OKI supports several federal ministries of finances around the globe in using the OpenSpending tools and the Fiscal Data Package, a light-weighted fiscal data schema built on the Frictionless Data Specifications that allows the data to be visualised and analysed.

The full report of the Open Budget Survey is available from this page: the data visualisations can be viewed through the Data Explorer site.

Anjali Garg is a program officer at the International Budget Partnership’s Open Budget Initiative. She is responsible for conducting qualitative and quantitative social science research, providing technical assistance to partners and in-country peer reviewers, as well as conducting country assessments and working with partners to develop and implement advocacy strategies to promote budget transparency reforms with a focus on Asia.