This report is part of the event report series on International Open Data Day 2019. Code for Curitiba and Open Knowledge Brasil / UG Wikimedia in Brazil received funding through the mini-grant scheme by Mapbox to organise events under the Open Mapping theme. This is a joint report by Ricardo Mendes Junior & Celio Costa Filho: their biographies are included at the bottom of this post.

Open Data Day is an annual celebration of open data that takes place all around the world. In its ninth edition, in 2019, people in various countries organized events using and/or producing open data. This is a great opportunity to show the benefits of open data and to encourage the adoption of open data policies in government, business, and civil society. In Brazil, these events occurred in the first half of March.

The initiative to conduct one of these events in the city of São Paulo came from two volunteers of the group Wiki Movimento Brasil. The idea of ​​the event came after the Brumadinho dam disaster, which occurred on January 25, 2019, when a tailings dam at an iron ore mine in Brumadinho, Minas Gerais, Brazil suffered a catastrophic failure. In this context, we perceive the importance of the existence of data from Brazilian dams of tailings properly structured on open platforms and with machine-readable data, such as Wikidata. This became even more visible when, by the end of January of this year, a report from the National Water Agency classified 45 reservoirs of dams as vulnerable, potentially affecting a population of 3.5 million people in risk-damped cities.

The purpose of this Open Data Day, therefore, was to perform the scraping of databases whose content is free, and create items on Wikidata rich in structured information about the existing dams in Brazil. The site of the National Information System on Dams Safety, controlled by the National Water Agency was the main source; the site records more than 3,500 dams. Once the data organized in a spreadsheet, the process of “wikidatification” began with the help of the participants of the event. Wikidatifying data is nothing more than modeling structurable data, that is, trying to establish correspondences between the concepts and values ​​presented in the data table and the properties and items of Wikidata. Only after wikidatification is it possible to upload the data to Wikidata. Each participant of the event raised about 500 items of dams.

Items created in this event can serve a variety of purposes, such as the illustration of dam maps by associated potential harm level (http://tinyurl.com/yyavll5o) and cross-checking of dam safety statistics with other databases (for instance, the ones related in the Brazilian news today: https://bit.ly/2CxqOla

The event is organized by the members of the Wiki Movimento Brasil and had the support of Creative Commons Brazil.

The Open Data Day Curitiba 2019 was held at the FIEP Paula Gomes Training Center and had 61 people participating, in 4 working rooms and watching the lectures in the auditorium. The programming of lectures had the collaboration of 11 special guests who spoke 15 minutes each one, in the subjects Access and reuse of scientific data, Open data of public spending in accessible formats, Open Science: Repository of scientific data of Research, Collaborative Mapping, Open Education and open educational technology, Impacts of the Brazilian General Data Protection Act, Information Systems for public transport, Use of methodology City Information Modeling (CIM) for urban planning, Transparency and social control, Roadmap to civic innovation in the public sector and Urbanism and collaborative mappings, civic engagement and urban laboratories. At the opening of the event the director of the Curitiba/Vale do Pinhão Agency, Cris Alessi, spoke about the innovation ecosystem of Curitiba and what actions we can perform as participants in the movement of civic hackers and encouraging public open data. In the working rooms the participants discussed and develop activities related to the themes of the ODD Curitiba 2019. 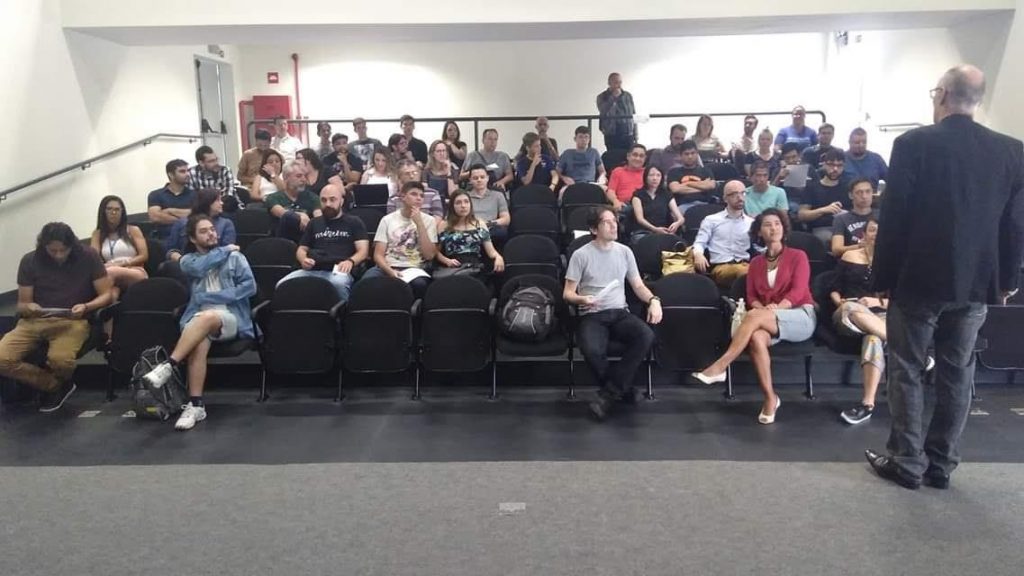 In the Open science working room 13 people participated in the activities and the group started discussing the contextualization of the concept of scientific data and some international approaches on the topic, the differentiation between scientific information and research product. The group then identified 3 datasets, analyzing its structures (data, documentation and support of the original publication that contextualizes the information). After this activity the group discussed the 8 Panton Principles that analyze the quality of open data, and discussed the repositories https://www.re3data.org/ and https://www.kaggle.com/. As a last activity, they discussed the context of scientific data in scientific journals, the types of copyright license for data and the difficulty of obtaining information from the data published on the platform http://lattes.cnpq.br/ of Brazilian researchers’ curricula. 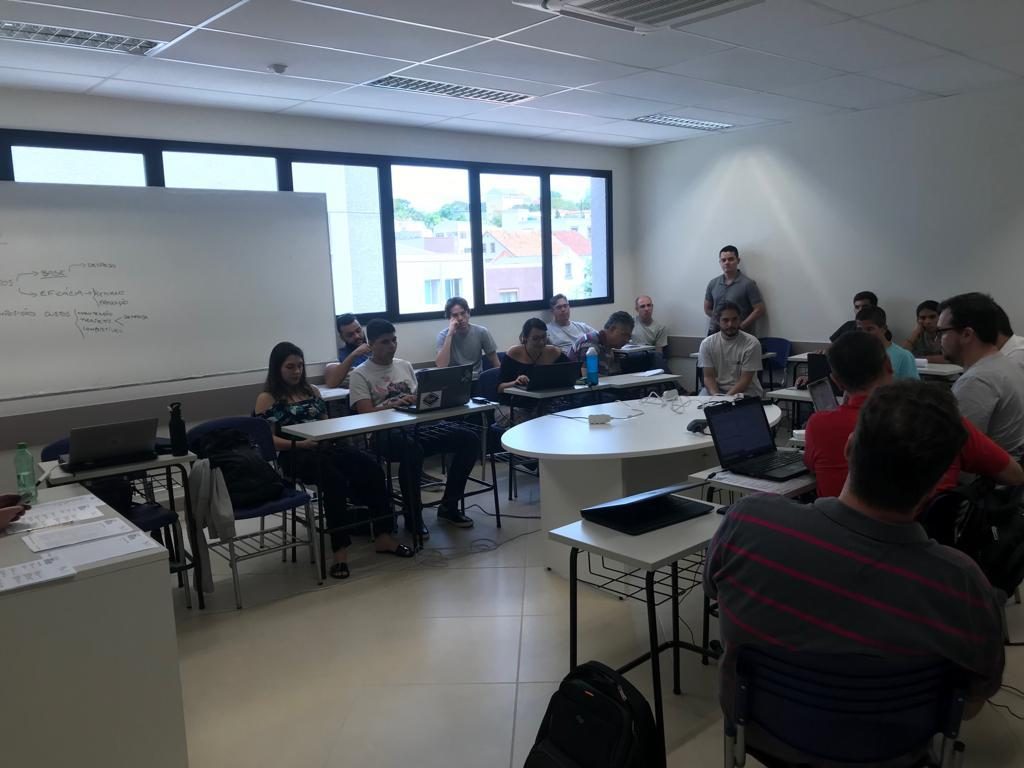 In the Tracking flow of public money working room 28 people participated. The initial discussions were about money spent in public events and public policy actions that use public resources and how to find the destination of these resources in the city’s documents (bids, commitments, notices, etc.). After this discussion, the group decided to concentrate on tracking drug expenditures and public transport costs. So, they started the discussion with questions related to these expenses. Subsequently, a map was elaborated with the money trail for these expenses, including the sources of information. This trail will be improved by the group, who pledged to continue working on these ideas. And the conclusion of the group is that citizen engagement is the best remedy and has been summarized in one sentence:

“The Ministry of Health warns: Citizen participation is the best remedy for public health management. “

In the Open Mapping working room was held the 1st Urban Accessibility Mapathon of Curitiba (Mapathon = Collaborative mapping marathon). The activity consisted of gathering information in the field of about 800 meters of sidewalks, per team, in the neighborhood of the event’s location. With the help of mobile applications, situations related to accessibility problems was collected, with coordinates, photos and videos. The Checklist had 18 items such as irregular pavement, irregular or non-existent accessibility ramp, hole in the lanes. After collection, the raw data were edited using the free QGIS software, generating the final unified maps that were made available to the community via an online map (https://goo.gl/UWezNK). Were Raised 39 Problems Of Accessibility In Surroundings. 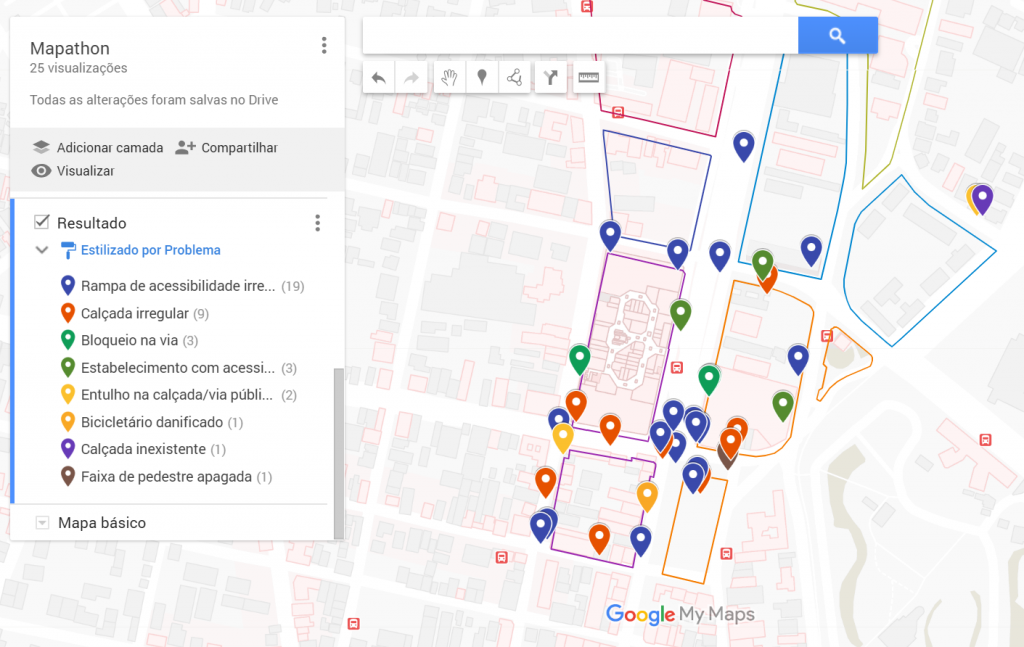 8 people participated in the ônibus.io project working room. The initiative started in 2019 and maintained by the Code for Curitiba aims to be an aggregator of data related to public transportation in the city of Curitiba. In the event, the project leaders, Guilherme and Henrique, presented the project, raised questions and the participants discussed ways to identify the answers. They conducted an exploratory survey of public and private services, extracted data and studied The webservice provided by URBS (Urbanization of Curitiba S/A). They Created a comparative table for identification of lines in different services and coded in PHP + HTML a view of these schedules. At the end, they took the opportunity to development and integration with the project Kartão, developed in Code for Curitiba in 2016, which presents the points of sale and recharge of the public transport card.

The Open Data Day Curitiba in previous years was also carried out by the Code for Curitiba. The ODD of 2019 was greater in public participation and in activities performed. The results obtained in this year include some direct results indicated below. A group formed to discuss and implement a solution to track the public money applied in medicines in Curitiba. The activity of the 1st Urban Accessibility Mapathon of Curitiba resulted in information geolocated that will be delivered to the Ippuc (Institute of research and urban planning of Curitiba) demonstrating how it is possible using technology to involve the population in collaborative urban planning with the mapping of information of the city. The ônibus.io project received valuable contributions from the participants and began to count with new collaborators. All projects under development in the Code for Curitiba are conducted by volunteers. The discussions on the Open Research Data initiated in the ODD 2018 have advanced. And finally, the evaluation by the participants considered the event positive to understand the existing challenges to work with open data and that data integration still requires great work. Collaborative mapping participants liked the idea of using georeferenced data for the improvement of the city. All were unanimous in stating that they would like to continue in the activities proposed by the ODD 2019, would like to receive more information and consider these important activities and of great impact to the city and to the understanding of effective citizenship.

Code for Curitiba is a brigade of Code for Brazil, inspired on Code for America. They use the principles and practices of the digital age to improve how government serves the public, and how the public improves government. To inspire public servants, people from the tech sector, and community organizers to create change by proving government can do better and showing others how. Providing government with access to the resources and digital talent they need so that together we can meaningfully impact some of the world’s toughest societal challenges. Connecting and convening people from inside and outside government, and from all over the world to inspire each other, share successes, learn, build, and shape a new culture of public service for the 21st century.