The following guest post is from Ivan Begtin, who is a member of the Open Knowledge Foundation‘s Working Group on Open Government Data.

Russian Federal Law – 94-FZ of 21.07.2005 declared that Russian Federal Treasury and Russian regional procurement agencies should publish online limited but valuable information about government contracts.
So since 1 January 2006 all government procurement systems were reconstructed to be online and to publish online contracts registries. These registries are just tables, DOC, XLS and PDF files and so on. Nothing visualized, no analytics at all, but lot’s of unstructured raw material.

So there is quite a bit of material available for anyone interested. But so far nobody seems to have converted this data into a public service!

This project named RosGosZatraty (Russian Government Spending) can be found at:

It was initiated and launched by Institute of Contemporary Development, which is a non-profit fund which Russian president Dmitry Medvedev is on the board of.

And lots of reports:

Sure, not everything is yet complete. We currently don’t have:

We will keep working on and improving the site.

For now it’s just non-profit mashup project based on existing open data. But I hope that later we will be able to make it more semantic web ready.

I am personally represent small software development company behind this project and as e-Gov expert and public spending specialist I am project manager of it. So it you have any questions – feel free to get in touch.

P.S. We don’t yet have any English pages on the site, so if you don’t know Russian then Google Translate can help you to find out more. 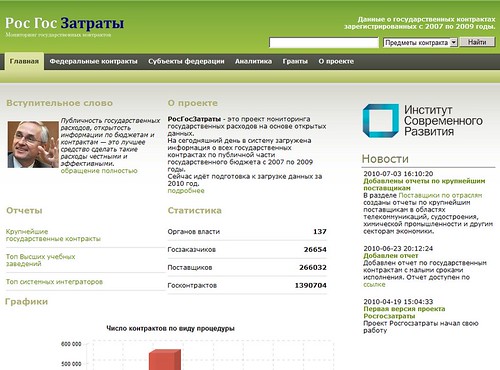