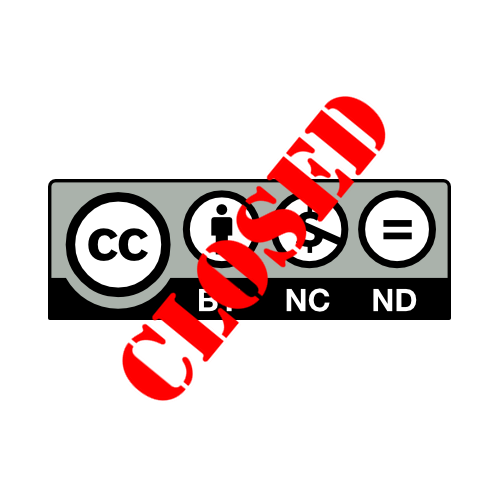 Over the past several years, Creative Commons has increasingly recommended free culture licenses over non-free ones. Now that the drafting process for version 4.0 of their license set is in full gear, this is a “a once-in-a-decade-or-more opportunity” to deprecate the proprietary NonCommercial and NoDerivatives clauses. This is the best chance we have to dramatically shift the direction of Creative Commons to be fully aligned with the definition of free cultural works by preventing the inheritance of these proprietary clauses in CC 4.0′s final release.

After reiterating some of the most common criticisms and objections against the NC and ND restrictions (if you are not familiar with these then they are worth reading up on), the post continues:

Most importantly, though, is that both clauses do not actually contribute to a shared commons. They oppose it.

This is a crucial point and one that I and others at the Open Knowledge Foundation have made time and time again. Simply: the Creative Commons licenses do not make a commons.

As I wrote on my personal blog last year:

Given that a) the majority of CC licenses in use are ‘non-commercial’ b) there is also large usage of ShareAlike (e.g. Wikipedia), this is an issue affects a large set of ‘Creative Commons’ material.

Unfortunately, the presence of the word ‘Commons’ in CC’s name and the prominence of ‘remix’ in the advocacy around CC tends to make people think, falsely, that all CC licenses as in some way similar or substitutable.

The NC and ND licenses prevent CC licensed works forming a unified open digital commons that everyone is free to use, reuse and redistribute.

Perhaps if Creative Commons were instead called ‘Creative Choice’ and it were clearer that only a subset of the licenses (namely CC0, CC-BY and CC-BY-SA) contribute to the development of a genuine, unified, interoperable commons then this would not be so problematic. But the the fact that CC appears to promote such a commons (which in fact it does not) ultimately has a detrimental effect on the growth and development of the open digital commons.

As the Free Culture blog puts it:

Creative Commons could have moved towards being a highly-flexible modular licensing platform that enabled rightsholders to fine-tune the exact rights they wished to grant on their works, but there’s a reason that didn’t happen. We would be left with a plethora of incompatible puddles of culture. Copyright already gives rightsholdors all of the power. Creative Commons tries to offer a few simple options not merely to make the lives of rightsholders easier, but to do so towards the ends of creating a commons.

Whilst Free Culture are focused on “content” the situation is, if anything, more serious for data where combination and reuse is central and therefore interoperability (and the resulting open commons) are especially important.

We therefore believe this is the time for Creative Commons to either retire the NC and ND license variants, or spin them off into a separate entity which does not purport to promote or advance a digital commons (e.g. ‘Creative Choice’).

Please consider joining us and Students for a Free Culture in the call to Creative Commons to make the necessary changes:

3 thoughts on “Making a Real Commons: Creative Commons should Drop the Non-Commercial and No-Derivatives Licenses”