Here at the Open Knowledge Foundation, we know Open Science is tough, but ultimately rewarding. It requires courage & leadership to take the open path in science.

Nearly a week ago on the open-science mailing list we started putting together a list of established scientists who have in some way or another made significant contributions to open science or lent their esteemed reputation to calls for increased openness in science. Our open list now has over 130 notable scientists, among whom 88 are Nobel prize winners.

In an interesting parallel development, the White House has just put out a call to help identify “Open Science” Champions of Change — outstanding individuals, organizations, or research projects promoting and using open scientific data for the benefit of society. 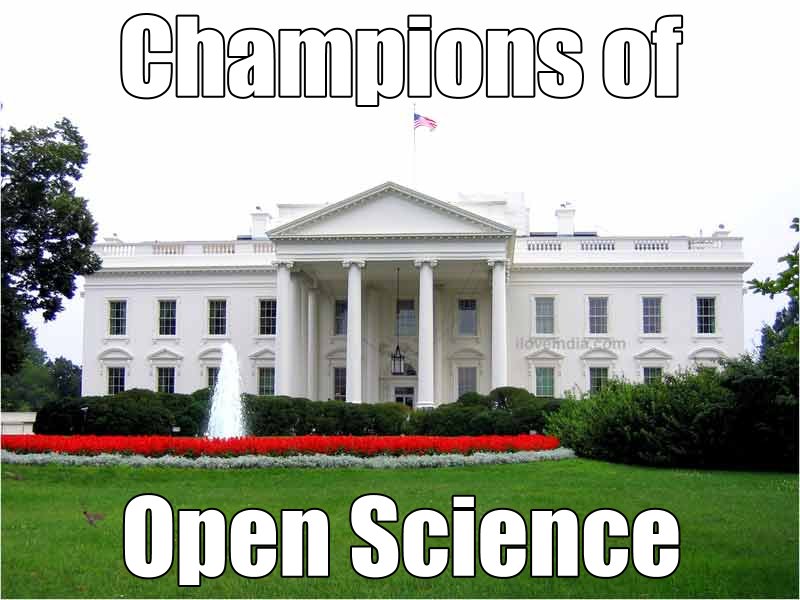 Anyone can nominate an Open Science candidate for consideration by May 14, 2013.

What more proof do we need that open science is both good, and valued in society? This marks a tremendous validation of the open science movement. The US government is not seeking to reward any scientist; only open scientists actively working to change the world for the better will win this recognition.

We’re still a long way from Open Science being the norm in science. But perhaps now, we’re a crucial step closer to important widespread recognition that Open Science is good, and could be the norm in the future. We eagerly await the unveiling of the winning Open Science champions at the White House on the 20th June later this year.

2 thoughts on “The White House Seeks Champions of Open Science”

Ross is a postdoc at the University of Bath, using content mining techniques to extract and re-use data from the academic literature. He is also a former Panton Fellow, trying to encourage data sharing / Open Data ethos in his research community. Making baby steps… e.g. in palaeontology