If you’d like to give the Open Knowledge Foundation a birthday gift, please consider making a regular or one-off donation to support our work opening up knowledge around the world! 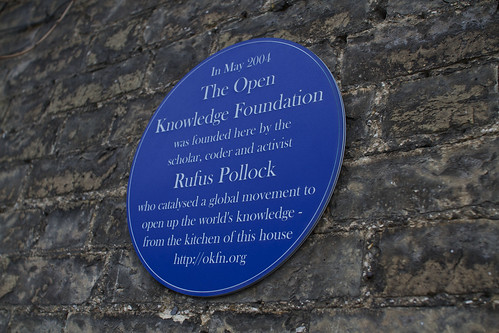 Plaque to commemorate the founding of the Open Knowledge Foundation in May 2004 on Panton Street, Cambridge.

Nine years ago today the Open Knowledge Foundation was born. We’ve come a long way from our humble beginnings in Cambridge in 2004.

From government to science to culture, open knowledge is now on its way to being established as an essential part of our information environment.

Governments around the world are now putting open data at the heart of their transparency plans. Major publishers and research funding bodies are supporting and mandating open access to research publications and data. Leading cultural institutions and cultural portals are opening up their holdings.

And there are now more projects, initiatives and organisations than ever before dedicated to using open knowledge to improve the world – from civic hacking to citizen science, from data journalism to the digital humanities.

But we still have our work cut out for us: much essential information about the world is still locked up or gathering dust, and much remains to be done if we are to put this information to work to improve the world.

To mark the occasion of us entering our tenth year, we’re going to have a quick look at where we’ve come from, and some of our hopes for the future.

Where we’ve come from

Many of the Foundation’s earliest projects, principles, activities and aspirations are still with us today.

The Open Definition – our foundational text

The Open Definition – which sets out principles that define “openness” in relation to data and content – was one of the first projects that we launched, and it still underpins everything we do.

Early on we still ran our big annual open knowledge events, like the ones we run today. Writer and open source advocate Glyn Moody (who now sits on our Advisory Board) wrote of our first edition of the Open Knowledge Conference (OKCon), Open Knowledge 1.0 in London:

The location was atmospheric: next to Hawksmoor’s amazing St Anne’s church, which somehow manages the trick of looking bigger than its physical size, inside the old Limehouse Town Hall.

The latter had a wonderfully run-down, almost Dickensian feel to it; it seemed rather appropriate as a gathering place for a ragtag bunch of ne’er-do-wells: geeks, wonks, journos, activists and academics, all with dangerously powerful ideas on their minds, and all more dangerously powerful for coming together in this way. 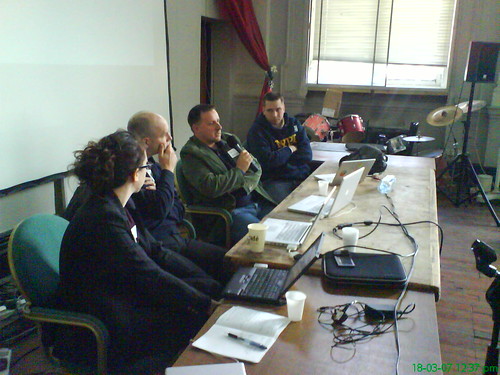 Panel discussion from Open Knowledge 1.0. From left to right: Becky Hogge, then Executive Director of the Open Rights Group; Charles Arthur, Technology Editor at the Guardian and Founder of the Free Our Data campaign; Ed Parsons, then CTO of the UK’s Ordnance Survey; and Steve Coast, Founder of Open Street Map.

Our 2010 and 2011 Open Government Data Camp events helped to transform a loose knit group of public servants, hackers and advocates into a coordinated force for open data around the world. Last year saw over 1000 people gather in Helsinki for OKFestival 2012, which was the biggest open knowledge event to date. This year, OKCon 2013 in Geneva will convene governments and civil society representatives from dozens of countries to figure out how to support the growth of open knowledge internationally.

OKF Founder Rufus Pollock’s 2007 call to ‘Give Us the Data Raw, and Give it to Us Now’ was adopted and popularised by web inventor Sir Tim Berners-Lee in a 2009 TED talk. This became one of the rallying calls of the open data movement around the world, and was widely covered up in the media (for example, see articles in the BBC, the Guardian, or Wired).

A prototype of our Where Does My Money Go? project – which shows how UK public funds are spent – was featured on the front page of the BBC News. The Open Knowledge Foundation went on to play a leading role in securing the release of the COINS and £25k spending data, which are amongst the most detailed spending databases ever released by any government. Our Open Spending project now has over 13 million transactions, covering over 50 countries and over 80 cities and regions around the world – from Belgium to Bosnia, Portugal to Puerto Rico. 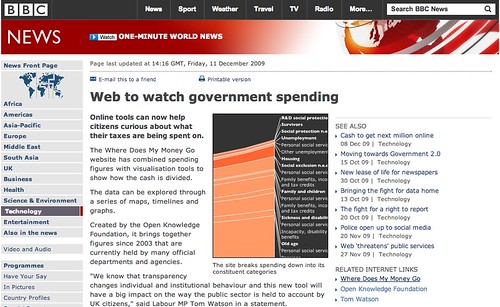 Labour MP Tom Watson on our [Where Does My Money Go?](http://wheredoesmymoneygo.org/) project [in the BBC](http://news.bbc.co.uk/2/hi/technology/8407779.stm): “We know that transparency changes individual and institutional behaviour and this new tool will have a big impact on the way the public sector is held to account by UK citizens.”

CKAN, our open source data platform, was one of our earliest software projects. It is now being used by governments and organisations around the world, and last week saw a major new release.

Empowering people to use data to change the world

Over the past few years, we haven’t just been working to open up the world’s knowledge: we have also helped more people than ever to use, share and benefit from it.

Our School of Data project works to help journalists and civil society organisations use data to improve their research and reportage. The Data Journalism Handbook, a free book that we created with the European Journalism Centre, shows journalists how to use data to improve the news and is now being translated into many different languages including Arabic, Chinese, French, Spanish, and Russian. 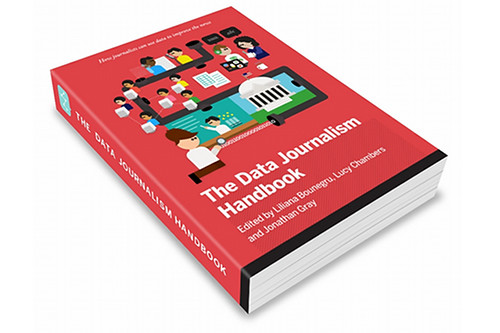 The [Data Journalism Handbook](http://datajournalismhandbook.org/), which [ReadWriteWeb said](http://readwrite.com/2012/05/03/what-everyone-needs-to-learn-from-the-data-journalism-handbook) offers “a resounding case for data-driven journalism … and the service that it offers the public”.

Opening up our culture

We have long been interested in the digital public domain and the cultural commons – from our early attempts to build a global registry of public domain works, to trying to model copyright law in countries around the world to determine which works are in the public domain.

The Public Domain Review started life as a relatively modest project to highlight interesting public domain works and to raise awareness of importance of having an open cultural commons. In the past few years it has received extensive praise from some of the world’s most prestigious literary publications, and has a dedicated base of regular readers which is just about to hit 10,000.

Our OpenGLAM initiative continues to liase with cultural institutions around the world to encourage them to open up their holdings – and to support people who are trying to create useful things using open cultural material, through initiatives such as the Open Humanities Awards. 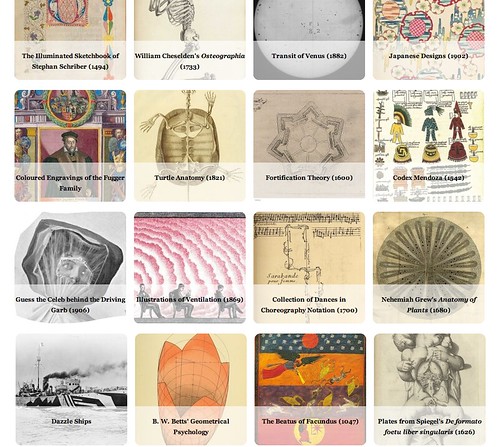 Curated collections of public domain images from the Public Domain Review, which [the Paris Review called](http://publicdomainreview.org/testimonials/) “one of our favourite journals”.

Since 2004, we’ve become a truly international organisation. We’ve gone from being a handful of like-minded advocates – mainly based in the UK and Europe – to becoming a global network, spanning countries and cities across the world.

We want to continue to expand and empower this network, to open up essential information about things that matter – from carbon emissions to clinical trials to our cultural past. We want to catalyse and support projects which use open knowledge to change the world for the better, whether through greater accountability, more successful data driven investigative journalism projects, or more collaborative scientific research.

We’re looking forward to many more years of open knowledge, and we have some really exciting plans for our tenth year and beyond. We hope you’ll join us.

1 thought on “Happy 9th Birthday to the Open Knowledge Foundation!”