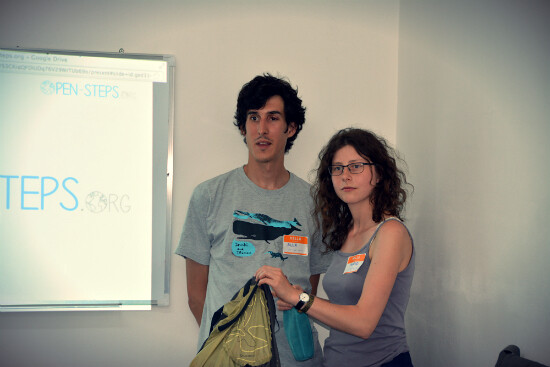 This is a guest blog post from Open Steps, an initiative by two young Berliners Alex (a software developer from Spain) and Margo (a graduate in European politics from France) who decided to leave their daily lives and travel around the world for one year to meet people and organizations working actively in open knowledge related projects, documenting them on their website.

Starting in July 2013 and for one year, we will travel through South-East Europe, Turkey, India, South-East Asia, Japan and South-America. During our travels we are generating a geo-located index of individuals and groups supporting open knowledge around the world.
We have a natural interest in open data as it is the area in which both our backgrounds converge. We will therefore also run a workshop entitled “Visualising Open Data to bring out global issues” on the way and furthermore research the current situation of open data in the countries we are visiting.

After leaving Berlin at the end of June, we have travelled along Europe crossing beautiful countries, meeting hard-working geeks & other activists and hearing about promising projects around the topic of open knowledge. Now it’s time for us to sit down, sum up all the impressions we have gathered so far and share them through this article.

You might have seen on our website that the organisations we met were mostly hackerspaces. Why is that? When it comes to sharing knowledge and supporting open cultures, these kind of organisations are on the top of the list. After sending more than a thousand emails and contact requests, we were happy to start receiving positive answers, and in Europe these were mostly from hackerspaces (Prague, Vienna, Tirana, Pristina, Skopje).

Visiting them was like doing a pilgrimage, travelling from one to the other. Each one is great and unique in terms of location, profile of members and running projects. But it was most interesting for us to discover that the interest and engagement of members of hackerspaces, especially in less developed countries, was extraordinary! We would like to highlight the efforts being done by the guys from Open Labs in Albania and FLOSSK in Kosovo, both of whom are pioneers in sharing knowledge through workshops and supporting open source software in these two countries. There, the public administration does not recognise the importance of these values and the word ‘open‘ is not so well known yet. Thanks to activists such as these, this is already changing.

In addition to hackerspaces, we also had the chance to visit inspiring places like the Solar Festival in Hranize, a small rural village in Czech Republic where a passionate group of people are sharing the benefits and beauty of clean energy. And the creative shop Zelazo in the Moda neighborhood of Istanbul, where people learn to design stuff by themselves.

For the love of Open Data

We love open data and we strongly believe it is a mechanism to improve our society in terms of transparency, democracy and citizen participation. That is what the second part of our project is about. With the support of the organizations we have visited, we have been able to run our workshop five times in total so far. Through it, we are not only spreading the word about the topic but also creating an opportunity to discuss about the situation of open data in the context of each country.

In our opinion, Europe shows a very heterogeneous implementation level regarding the steps towards being open: engagement of public administration, availability of open data platforms, legal framework and civil society awareness. We have experienced countries like Germany or Austria where both governmental and independent organisations (also at regional and local level) are already working on gathering and releasing data into the public domain, organising events and meeting challenges so developers create useful civic tools.

On the other hand, there are other countries like Albania where the first steps have not been taken by the government but by independent groups. Or like Turkey, which has been participating in the Open Government Partnership initiative since 2011 but has still not carried out any of the points specified in its action plan. As Mr Elshani, Head of e-Governance in Kosovo, pointed out during the debate at our event in Pristina, countries must first face issues like the need of infrastructure or gathering and categorising the data, before starting to release it. Of course, in our opinion the social-economic situation and the will of the administration to support transparency plays a big role when it comes to taking part in open data and open government initiatives.

The active participation of the attendees during our workshops has proven that open data is a very current and promising topic with big perspectives. However, there is a certain scepticism and a feeling that there is still a lot of work to do. The two questions we were mostly asked were focused on the integrity and authenticity of the data and on the use of standards for its publication.

Moving on from Europe…

After these first months in Europe, Open Steps will arrive in India in mid-September. We are hoping to meet more of the kinds of creative and passionate people that we have met up until now, so we are already establishing contacts with individuals and collectives working in open knowledge in the areas of education, government and social problem solving. Stay tuned for new updates, feel free to point us towards interesting projects and share your thoughts with us! You can follow our project under the addresses below: