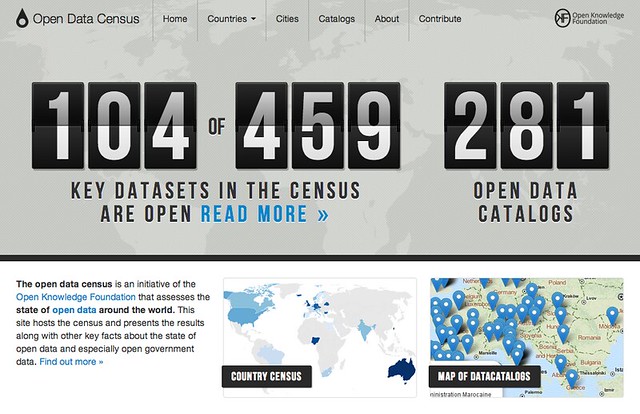 Would you like to help track the state of government data? Then now is the time to join the Open Data Census community as one of the Country Editors for your country and help our community-driven push to show governments of the world the state of open data!

The Open Data Census is a tool that assesses the evolution and current state of open data around the world. It is a community-based effort initiated and coordinated by the Open Knowledge Foundation but with participation from many different groups or individuals: Citizens in countries all over the world contribute either by going to the site to submit information about their home country, or by becoming a Country Editor!

Joining the community as a Country Editor for your country

Country Editors are local citizens, and require no special skills – other than curiosity, Internet access and the desire to investigate what government data are open in their country by browsing the web. They volunteer, often in groups, to act as contact person(s) for their country and to coordinate the collection of data from other volunteers in the same area. It’s a position that does not requires a lot of time, but is pivotal to the success of the Census.

We are looking to expand the community of Country Editors, in order to present the Census results at the monumental Open Government Partnership Summit in London on October 30 – to show the world the current state of open government data, as seen by the citizens of the world. The aim is to have a fully expanded, updated and reviewed Open Data Census to present, and a magnificent tool for communities all over the world to use to start discussions with their governments and to drive the open government data agenda forward in their local area.

Here is what to if you are interested in joining:

Please get in touch with any questions or comments you may have. We suggest posting them on the Census Discussion List, so that we can all engage around the same ideas, concerns and opportunities. You can also read more about the Country Editor role and check out the Open Data Census FAQ, which may answer your query – or you can get in touch directly with Christian Villum, the coordinator of the Open Data Census.

Note that everyone is invited to subscribe to the discussion list and to engage in the discussions there, even if you are not planning to become a Country Editor.

We’re looking forward to welcome you to the Census community!