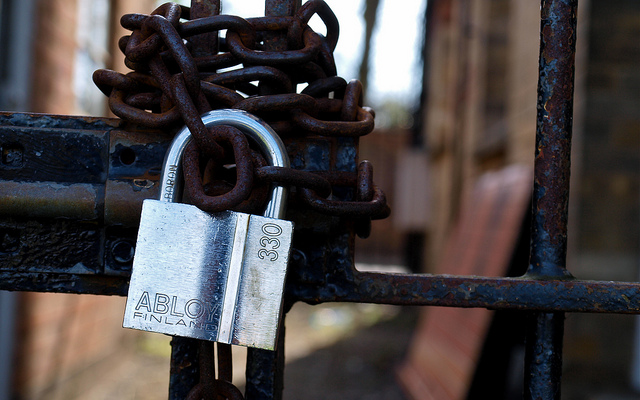 This is a translated and edited version of a blog post originally appearing on the Danish denfri.dk blog. See the original post here.

These past few weeks have highlighted the crossroads that we as a society are facing: Whether non-open data, siloed knowledge and patented ideas make up the best way for growth and innovation? Or whether the logic of the Internet with it’s open data, open knowledge sharing, open sourcing and remix-culture is the right path for the modern society?

A couple of weeks ago we saw the premiere of “The Internet’s Own Boy”, the documentary of Aaron Swartz, the now world-famous young Internet prodigy that despite enormous success with his start up business chose to throw himself actively into the battle to secure everyone free access to the large academic database JSTOR: An access that is normally only granted to the few that can afford a university degree.
Appalled by the unproportionally high fees charged by JSTOR for access to (often tax funded) scientific journals Swartz set up a computer in the basement of the American MIT university, and started to download all the journals in the database.
His scheme was unravelled when caught by a security camera, and contrary to all legal precedence, in order to make an example of Swartz, the federal government chose to charge him with a felony: Something that would likely send Swarz behind bars for up to 35 years.
The pressure from the government and the FBI hurled Swartz into a depression and he ends up taking his own life. A horrible and tragic story.

As an entrepreneur and Danish translator of some of Swarz’ texts I had the pleasure of being invited to participate in a panel at the Danish premiere event for the film in Copenhagen earlier this month. In this panel was also Director for the Danish National Library, Pernille Drost, who explained to the audience that even Denmark, with our free educational system, have similar draconian rules for access to our scientific journals (and cultural heritage as well).
Science and culture is held systematically locked up behind technical and legal iron gates and is thereby closed off for the general public – both domestically and abroad – unless you are wealthy enough to pay huge sums of money. This goes even for journals that are a 100 years old!

Additionally, we recently had a referendum in Denmark to determine if we were to join the unified European patent court. The result was a resounding ‘yes’ (roughly 70% of the votes in favor of joining), which sent a clear signal – mainly inspired by the majority of the Danish political parties, both left and right – that we as a society believe ideas are developed best by being locked up and protected. Apparently, the idea is that only those companies rich enough to be able to afford expensive patent lawyers and navigate the complicated intellectual property rights universe should be the ones to ensure our continued growth, improve our welfare and create a balanced and fair global society.
In other words, we choose to keep our knowledge hermetically locked in and accessible only to a very few hands, both in the United States and in Denmark. The same applies to the rest of the world, especially the developed world. But is this the best way forward? For ourselves and for the world?

In “The Internet’s Own Boy”, for instance, we saw examples of how free access to knowledge can create some very defining breakthroughs in science. Among other the film tells the story of a 14-year old boy in the US, who independently from the school system uses his wit and access to a series of otherwise unavailable science journals to develop a groundbreaking quantum leap in cancer science – to the great surprise of all doctors and scientists within that area.

This example made me think of the story about the English economy student Thomas Herndon, who in 2010 via access to a financial study made by Carmen Reinhart & Kenneth Rogoff discovered a critical error in one of the most prolific analyses therein: An analysis with calculations used by governments around the world to guide economic austerity policy during the global financial crisis.
The critical error had created an erroneous foundation for political work on the highest level – and it wasn’t discovered until Herndon, a graduate student at the time, obtained access and started looking into the numbers.

It also reminded me of the story of “The Boy Who Harnessed the Wind”; a tale which in book form by author Bryan Mealer became an international bestseller. Mealer describes how another 14-year old, William Kamkvamba in Malawi, gets access to a handful of old science books and builds a fully functional wind turbine from scrap metal and all of a sudden produces power for his village in the chronically poor (and 98% powerless) African country.

Let’s zoom back to Denmark again. Two weeks ago an interesting story occurred in the news: A group of amateur data analysis enthusiasts (most of them actually from the Open Knowledge Denmark group) had looked into the data from Unified Patent Court referendum, which had been released in a somewhat open format. This made the group discover an anomaly in the reporting of votes from the small city of Taarsbaek north of Copenhagen: Something didn’t look right. The group contacted the authorities and further investigation showed that the officials in Taarsbaek had accidentally switched the ‘yes’ and ‘no’ votes! A human error, yes, and not something that had any influence on the final result. But at the same time an error that had never been discovered if the data hadn’t been released for the public to scrutinize.

What does these examples say about the gigantic potential of free access to knowledge?

Imagine if citizens in general had the opportunity to access scientific journals? Build on existing technology? Look into all our non-sensitive public data? How many errors could be corrected? How many breakthroughs would we see in medicine research? How many inventions and infrastructural improvements would proliferate in the developing world?
Sadly, it’s a utopia, because we keep our knowledge locked up and kept away from the public eye. Isn’t it time we get rid of that kind of old-fashion pre-Internet thinking?

All the peoples around the world make up a huge brain trust, a giant computer, which holds a potential for growth and welfare that we can hardly imagine. The Internettet is the nerve system in this latent supercomputer. But to activate it we need to stop seeing science and knowledge as only a tradable product, which only the richest 5% of the world’s population has access to.
By opening up knowledge for everyone, we create a foundation for citizen science that will enrich us all with a growth potential that exceeds our own capability by many unimaginable lengths.

Learning from the Internet

“Sure,” you think, “but what about the cost? It’s not cheap to research and develop ideas!”. Of course not, but look at the economies already developing on the Internet: For example open source software, where developers around the world share computer code and stand on each other’s shoulders, even if they are competitors. An billion dollar economy, where all parties become richer, and where companies flourish and where millions of jobs are made, while the core of it all, the code – that is, the product – is freely available for anyone to continue building on.

In the software world a large part of the major actors have already abandoned patents and tossed away the iron gates in favor of a much more powerful growth paradigm: Sharing of knowledge, crowdsourcing and open data. This open source mindset can easily be transferred to the rest of society, including the science world and business in general. The economic potential is gigantic – for all of the world’s population. Let’s all lead the way for this kind of thinking. That is real innovation.

4 thoughts on “Why are patents and locked-up science seen as the way forward for growth and innovation?”