Open Knowledge Brazil and Fundação Getúlio Vargas (FGV) – a higher education institution in Brazil worked together to develop the Brazilian edition of the Open Data Index, which is being used by governments as a tool to enhance public management, and bring it even closer to Brazil’s reality.

About the Open Data Index

The Brazilian edition of the Open Data Index has been used as a tool to set priorities regarding transparency and open data policies, as well as a pressure mechanism used by civil society to encourage governments to enhance their performance, releasing sets of essential data. The indicator is based on data availability and accessibility across 13 key categories, including government spending, election results, public acquisitions, pollution levels, water quality data, land ownership, and climate data, among others. Submissions are peer reviewed and verified by a local team of data experts and reviewers. Points are assigned based on the conclusions reached through this process.

Through a series of events held in partnership with Open Knowledge Brazil (OKBR) and FGV’s Department of Public Policy Analysis (DAPP) launched the Brazilian edition of the Open Data Index (ODI) – a civil society initiative designed to assess the state of open government data worldwide.

Three assessments were established for Brazil through a joint effort between the two institutions:

The last two are part of a pioneering initiative, since these are the first regional ODIs in Brazil, in addition to the nationwide assessment.

This partnership with OKBr and the development of the Open Data Index complement DAPP’s life-long efforts in the areas of political and budget transparency, featuring widely recognised tools such as the Budget Mosaic and Transparent Chamber. We believe that public debate can only be qualified through data transparency, social engagement and dialogue within network society –  Marco Aurelio Ruediger, director of DAPP

The two institutions are working to develop the indicator used by governments across 122 countries as a tool to enhance public management and bring it even closer to Brazil’s reality. The goal is for data disclosure to promote institutional development by encouraging transparency within the government’s foundations, achieved both through constant scrutiny by civil society and improvements implemented by administrators regarding the quality and access to information.

Among the practical results of this new effort for society is the possibility of using results to develop and monitor public policies regarding transparency and open data – Ariel Kogan, CEO of OKBR

The Open Data Index for Brazil, launched on April 27 in Brasilia, revealed that the country is in 8th place in the world ranking, tied with the United States and Latvia, and it occupies the leadership among its neighbours in Latin America. In total, 15 dimensions related to themes such as public spending, environment and legislation were analysed. However, the overall score of 64% indicates that there is still a lot of room for improvement. Only six — or 40% — dimensions of the index received the total score, that is, they were considered totally open: Public Budget, Electoral Results, National Maps, Socioeconomic Statistics, Laws in Force and Legislative Activity. 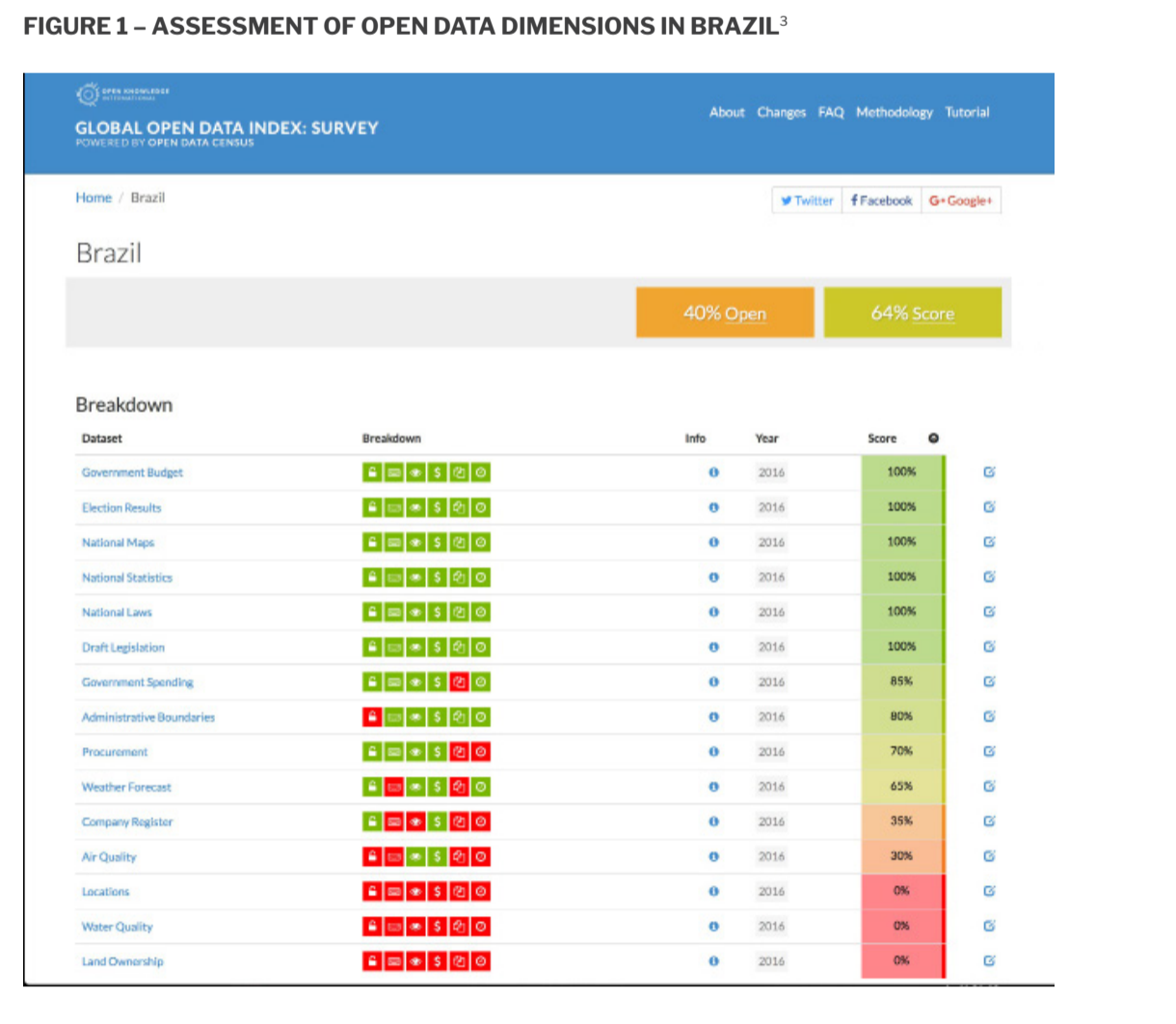 However, no public databases were found for three dimensions surveyed: Locations, Water Quality and Land Ownership.

The ODI São Paulo, launched two days earlier, had a similar result. In the overall assessment, the municipality had a positive result in the index, with 75% of the total score. Within the index analysis dimensions, 7 of the 18 evaluated databases obtained a maximum score: this means that 38% of the databases for the city were considered fully open. 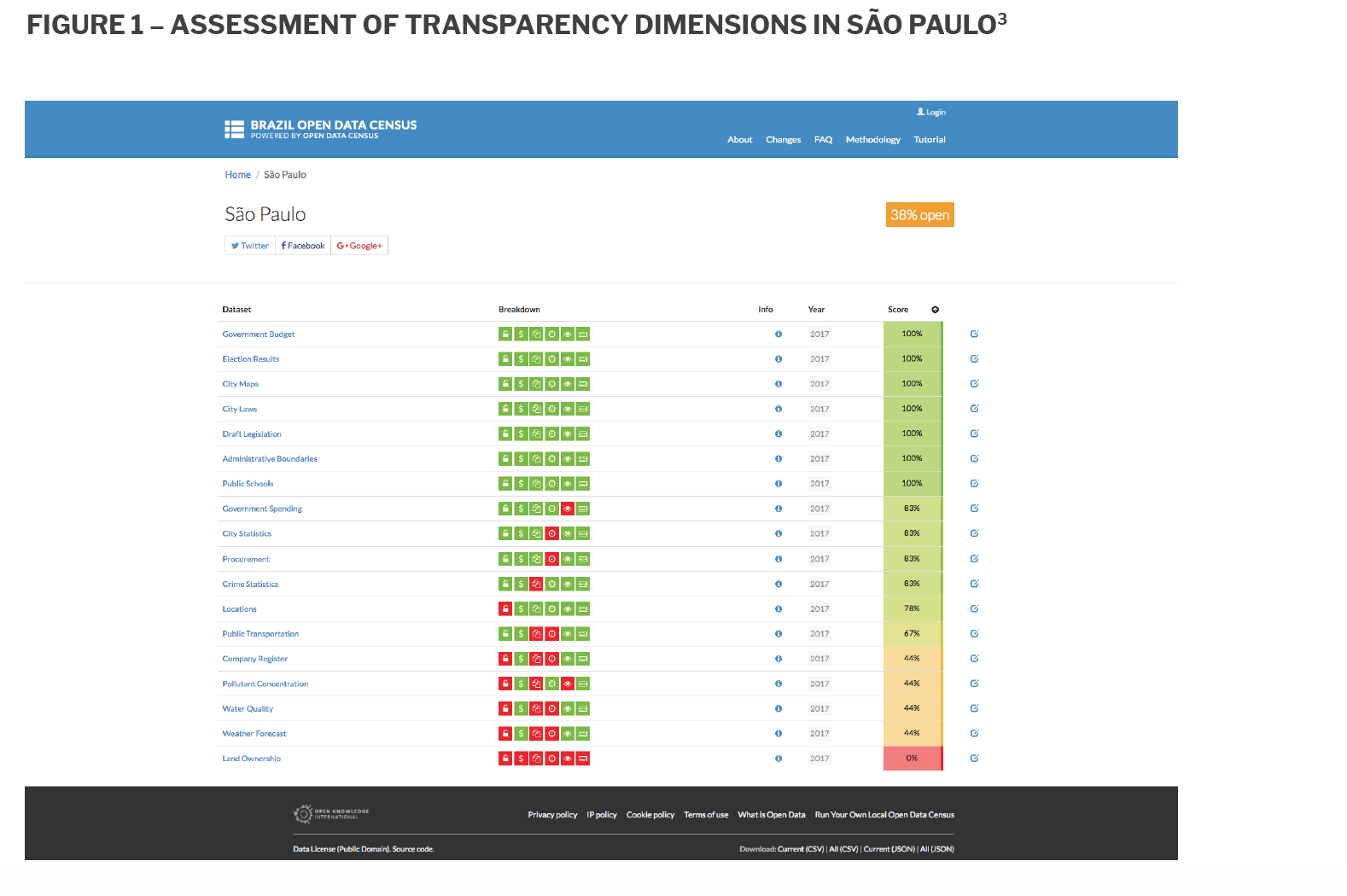 On the other hand, the Land Ownership dimension was evaluated with 0%, due to the unavailability of data; and another four had a score lower than 50% (Business Register, Water Quality and Weather Forecast).

The ODI Rio de Janeiro [report in Portuguese], released on May 4, showed a slightly different performance. The city of Rio de Janeiro had a high overall score, reaching 80%. The study indicates, however, that only five dimensions (Election Results, City Maps, Administrative Limits, Criminal Statistics and Public Schools) had the individual score of 100%, with only 27% of the databases being considered fully open. 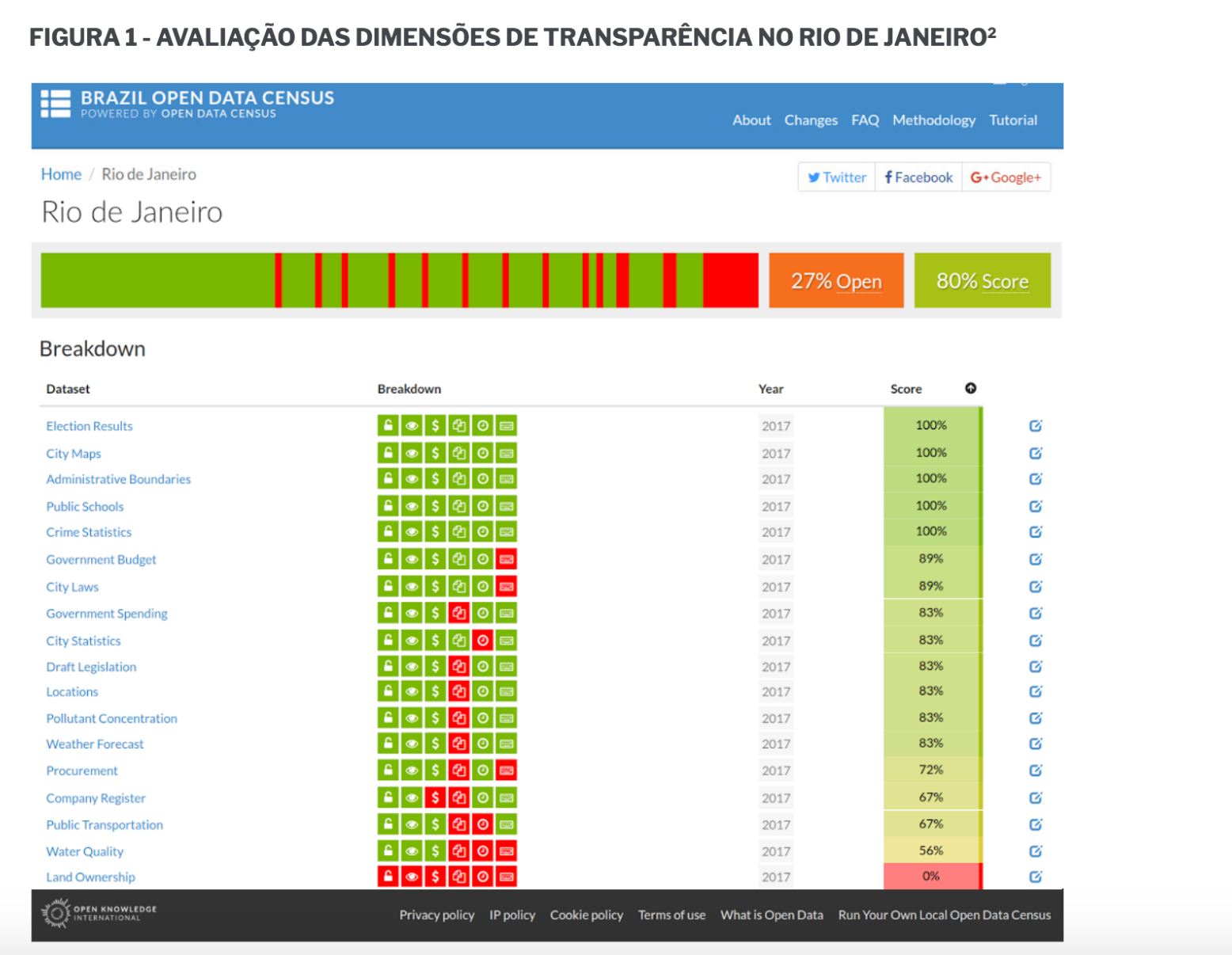 The incompleteness of the dataset appears six times, i.e. there is no availability of certain information which is considered essential. The issue of access restriction appears only in the Business Register dimension. The Land Ownership dimension is also considered critical, since there is no data available for carrying out the ODI assessment.

In summary, it is believed that the information can be useful for an open data policy at the municipal and federal level, to provide the paths for the replication of good practices and the correction of points of attention. The benefits of an open data policy are innumerable and include the extension of management efficiency, the creation of an instrument for collecting results from public administration, promoting accountability and social control, engaging civil society with public management and improving the public image, with the potential of becoming an international reference