Open licensing is still a major challenge for open data publication. In a recent blog post on the state of open licensing in 2017 Open Knowledge International identified that governments often decide to create custom licenses instead of using standard open licenses such as Creative Commons Attribution 4.0.

This so-called license proliferation is problematic for a variety of reasons. Custom licenses necessitate that data users know all legal arrangements of these licenses – a problem that standard licenses are intended to avoid by clearly and easily stating use rights. Custom licenses can also exacerbate legal compatibility issues across licenses, which makes it hard (or impossible) to combine and distribute data coming from different sources. Because of legal uncertainties and compatibility issues, license proliferation can have chilling effects on the reuse of data and in the worst case prevent data reuse entirely. 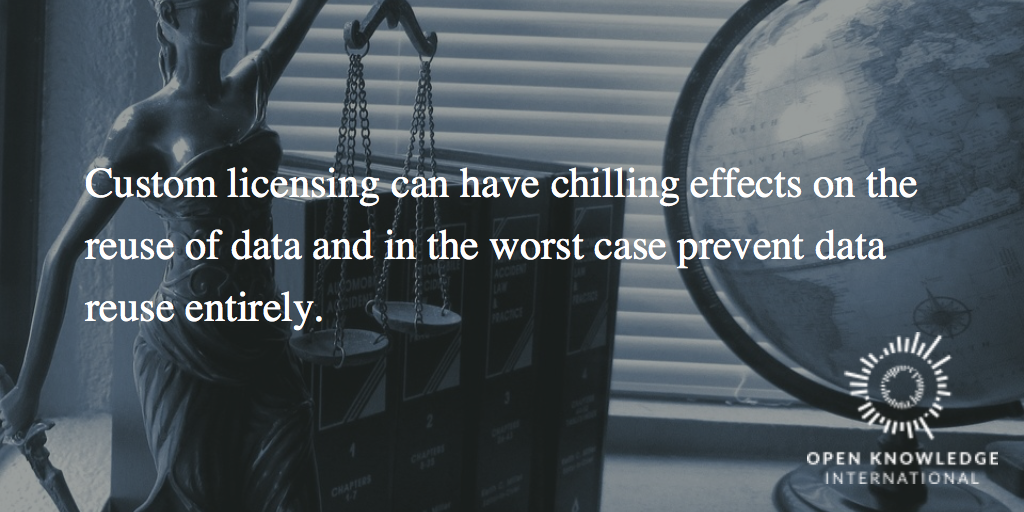 When investigating this topic further we noticed a dearth of knowledge about the drivers of license proliferation: neither academia nor grey literature seem to give systematic answers, but there are some great first analyses, as well as explanations why license proliferation is bad. Why do governments create custom licenses? Who within government decides that standard licenses are not the best solution to make data and content legally open? How do governments organise the licensing process and how can license recommendations applied across government agencies?

Exploring the drivers of license proliferation

In order to address these questions Open Knowledge International started a research project into license proliferation. Using the findings of the Global Open Data Index (GODI) 2016/17 as a starting point, we first mapped out how many different licenses are used in a selection of 20 countries. This includes following countries which either rank high in GODI, or where the Open Knowledge community is present:

Now we want to explore how governments decide what kind of license to use for data publication. We intend to publish the results in a narrative report to inform the open data community to understand the licensing process better, to inform license stewardship, and to advocate for the use of standard licenses.

We hope to hear from you soon!

4 thoughts on “New research: Understanding the drivers of license proliferation”