The following guest post is from Chris Taggart of OpenlyLocal, who advises the Where Does My Money Go? project on local spending data, and is a member of the Open Knowledge Foundation‘s Working Group on Open Government Data.

With a string of announcements this week and the COINS database (the UK’s biggest source of information on public spending) about to be released tomorrow, it’s an exciting time for open data in the UK at the moment! When I first played around with the idea of opening up the basics of local government data (which turned into OpenlyLocal), I never imagined I was entering an area that little more than a year later would become such an exciting area, combining two of the hottest online trends, open government data and local data.

But still, there’s a hell of a long way to go, and one of the areas where there’s furthest to travel, and most to do is finance, specifically where the money’s being spent, who it’s being spent with, and also where it comes from. As the old journo saw goes: follow the money.

I had my first taste of the problems when I took a pretty much unused (and locked) spreadsheet, the 2006-07 Local Spending Report, and over the course of a weekend, unlocked it cleaned it up, imported it into a database and allowed people to do what the spreadsheet didn’t — make comparisons on local spending across councils and in areas. 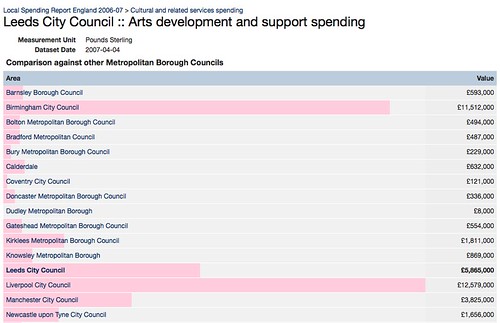 However, the information was fairly heavily aggregated, was for just one period, and didn’t allow comparison with other financial reports.

So at the last OKCon a month or so ago, I sat down with some of the good people from Where Does My Money Go to discuss in some general principles for presenting government finances as data, to allow it to be properly analysed, combined with other data, and follow the flow of money to and from all branches of government, central and local. Now, the first draft has been published:

Obviously we’d welcome comments from both the UK and other countries. It’s also worth noting that there are two overlapping but slightly different areas: the accounts, and the transactions. Ultimately if you have access to the transactions you can work out the accounts, but it may be worth teasing out the distinctions, particularly in light of the UK moves (see below).

At the same time as doing this, in the UK things have been moving on apace, with the new coalition government announcing that by January 2011 all spending by local government over £500 must be published, which in government terms is a blink of an eye.

In addition, Will Perrin and I, who both sit on the Local Public Data Panel, were also asked for advice by Camden Council, who in the best traditions of open data wanted to get on and release their data a lot earlier than this.

Within literally a few days, and with much helpful advice from many of the other Local Public Data Panel members, a first draft was done, and was published yesterday on data.gov.uk. This clearly is very much a UK document, is concerned with local spending, and is framed by the goal of publishing spending over £500. However, like the Open Knowledge Foundation document, it’s meant as a first draft, and a focal point for discussion and I’d encourage all, whether open data and transparency advocates, or those working in local government (including police, health authorities etc) to add their comments to this document too.

2 thoughts on “Opening up government finances”